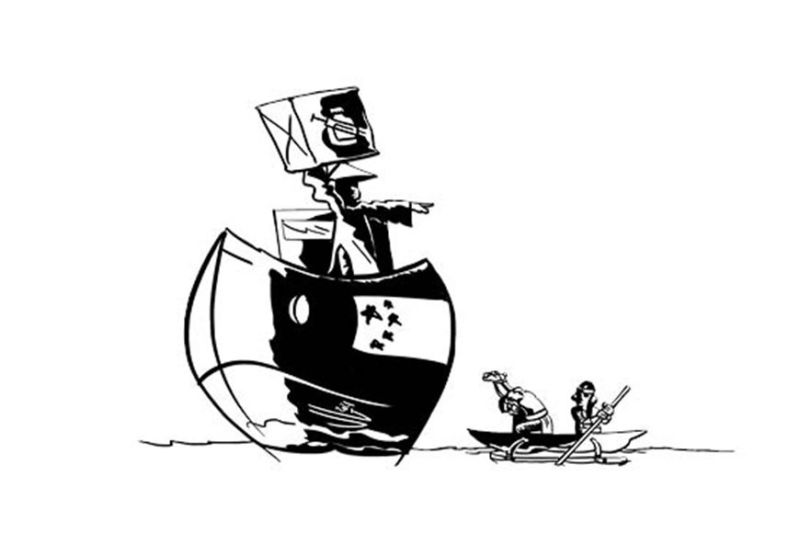 Philippine Ambassador to China Jose Santiago “Chito” Sta. Romana says that although we must exercise a “high degree of vigilance, a high degree of monitoring” over the persistent presence of around 200 Chinese maritime militia vessels, as the Philippine Coast Guard reported, at the Julian Felipe Reef in the West Philippine Sea, the matter should be resolved with an “abundance of diplomacy.”

His suggestion came while words between the Philippine Department of National Defense Secretary Delfin Lorenzana and the Chinese Embassy in Manila escalated.

The Chinese Embassy earlier explained these were just fishing vessels taking shelter in the area due to bad weather. The National Task Force for the West Philippine Sea (NTF-WPS) disputed it in two counts. One, they were not fishing vessels, but maritime militia. “Their build-up and massing of the Kalayaan Island Group is hazardous to navigation and safety of life,” the body said. Secondly, the weather was fine while these ships huddled suspiciously in an area with the Philippines’ exclusive economic zone (EEZ).

“Umalis na kayo, dyan,” were Lorenza’s strong words. “The Chinese Ambassador to the PH has a lot of explaining to do. There are still 44 Chinese vessels that are in Julian Felipe Reeef. I am no fool. The weather has been good so far, so they have no reason to stay there.”

To which the Chinese Embassy responded: “The Niu’e Jiao is part of China’s Nansha Islands. The waters around Niu’e Jiao have been a traditional fishing ground for Chinese fishermen for many years. The Chinese fishermen have been fishing in the waters for their livelihood every year. It is completely normal for Chinese fishing vessels to fish in the waters and take shelter near the reef during rough sea conditions...Nobody has the right to make wanton remarks on such activities. China is committed to safeguarding peace and stability on the waters and we hope that authorities concerned would make constructive efforts and avoid any unprofessional remarks which may further fan irrational emotions.”

At the outset, the area where the vessels were literally comes in their own terms, calling it “Niu’e Jiao,” clearly a message persistently asserting China’s claimant narrative over the South China. Either a subtle or outright disrespect of the UNCLOS decision reaffirming the Phlippines’ EEZ claim.

It wouldn’t bode well for the Philippine defense secretary to go soft on his word against this incident, and thus he finds himself in a tricky situation when the administration is perpetually obsessed with its being chummy to its “neighbor” and “close friend.”

“There will be an increased presence of Philippine Navy and Philippine Coast Guard ships to conduct sovereignty patrols and protect our fishermen in the West Philippine Sea,” Lorenzana said.

The Philippine Air Force, he said, sends an element of AS211 jet aircraft daily to monitor the area. He said, “We are ready to defend our national soveriegnty and protect the marine resources of the Philippines.”

The Philippine President had not been true to his campaign promise to speed off on a jetski and plant the Philippine flag on these disputed islands. Seriously, the Philippine Constitution is clear in Section 2, Article II—renounce war as a national policy and abide by international laws.

Sadly, China has not been one to go along these lines with continued agression in these areas. Former Associate Justice Antonio Carpio has been pointing a number of things we can do.

One, to encourage world navies to exercise freedom of navigation in the high seas and EEZ’s of the South China Sea, a move that will demonstrate a disregard to China’s nine-dash line claim; two, ask the international community to help the Philippines, Vietnam, Malaysia, Indonesia and Brunei to explain to the Chinese people that its historical claim over the South China Sea stands on weak ground and without evidence; three, pursue the rule of law as embodied in the UNCLOS.

Lorenzana coudn’t help himself but think along the lines of a soldier, but that is always out of the question. An “abundance of diplomacy” includes seeking the help of the international community, a discipline beyond the turf of the defense secretary.