EXPLAINER: Mambaling underpass project 'a failure from the start.' DPWH largely to blame but oversight is also city's, congressman's job. 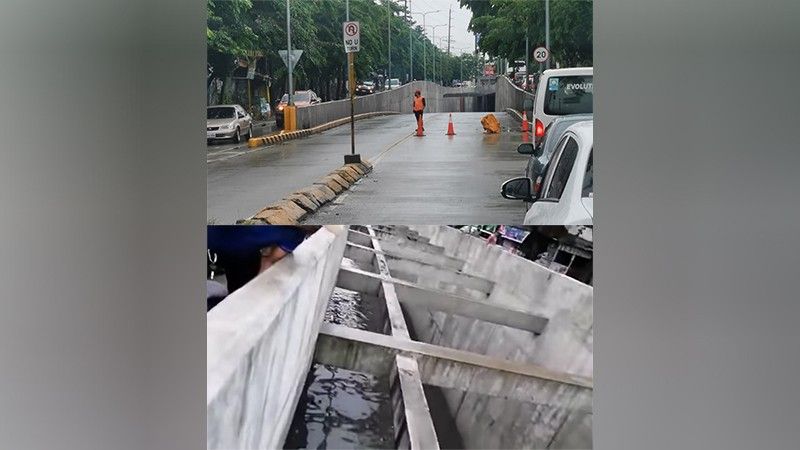 In the City Council session of October 14, following the Sunday when the Mambaling underpass overflew with spillover water from the streets and the mountains, a DPWH official told the Sanggunian that the P638-million project was wrongly constructed, as it had no drainage system. A cistern that was to be built below the underpass, which could hold runoff water from two barangays, was absent from the completed underpass. (P638 million was the initially reported cost; the P800 million that Caindec cited could be the total upon completion.)

Representative Rodrigo "Bebot" Abellanosa of Cebu City south, who secured the money for the project in the House, seized and waved an alleged DPWH promise that a cistern "the size of 10 Olympic swimming pools" would cope with the drainage problem. It was supposed to be a "smart tunnel" aped from the Kuala Lumpur system, which was to be the pilot for similar drainage projects in Cebu.

In that session last year, (1) Councilor Eduardo Rama Jr. put on record that the Mambaling underpass was a "failure" from the "very beginning": "sipyat na ni sa pagsugod pa lang daan"; and (2) Vice Mayor Mike Rama announced he wanted the flooding in the area "to be solved immediately," saying he'd go with DPWH people to the site right after the session and end the crisis.

CRY FOR HELP. Fast forward five months: Last April 3, with the new flooding at the Bacalso-Llamas junction, the horrifying traffic choke-up in an area where two supermarkets and other business establishments draw throngs of people and vehicles. Mayor Edgardo Labella wrote Public Works and Highways Secretary Villar asking him to send experts to look into the usefulness and safety of the Mambaling underpass: 30 minutes of rain, Labella said, could heavily flood it.

The cry for help might yet push DPWH to end the recurring drainage crisis.

But the "imported" experts are not likely to find anything more than the agency's regional technicians had long discovered. Local DPWH technical people, prodded by the Sanggunian, had long ascertained the cause and what to do about it.

LONG-TERM SOLUTION. The long-lasting solution would've been the KL system: that cistern, even if not the size of 10 Olympic-size swimming pools. After that was struck out, the next plan was to add service roads on both sides of Natalio Bacalso, with drainage systems for large volume of water. But then, that apparently is taking time, perhaps because of road right-of-way problems; they couldn't speed up the process of expropriating the land needed.

Last October 18, 2020, the City Council authorized DPWH to start the work on the widening of side streets along the underpass. Councilor Jerry Guardo, chairman of the Sanggunian committee on infrastructure, said then that the move would finally address the drainage problem.

It still has not. Last Holy Wednesday, March 31, huge jams because of the flooding at the underpass eased only towards noon, long enough to revive people's outrage over the project.

PUBLIC ILL-WILL. Commuters to and from the south don't forget the ordeal they went through from the time the underpass project began in 2017 and was completed and opened to traffic two years later, on June 15, 2019.

Expectations were high: the less-than-a-kilometer-long underpass was to allow commuters to skip the busy Mambaling-Labangon intersection and, with its gargantuan cistern, was to save residents of the two barangays from flood water.

A letdown in both purposes. Not just commuters but also those who live near the underpass and sitio folk in the lower area of the two barangays are going through terrible inconvenience again. Was the two-year public suffering during the underpass construction, along with the enormous government expense, worth it?

Councilors, particularly those representing the south district, have been hopping mad over the ill-fated project, caused largely by the apparent gross failure to overcome the drainage issue.

'BAND-AID' MEASURES. DPWH has been trying to compensate its failure to set up the cistern and build the service roads and their drainage component by taking temporary measures, including these: [] Pumping out the water during heavy rains. [] Regular de-silting of outflow points and inlets. [] Using bigger pipes (72" by 72" instead of 36" by 36").

The pumps, four of them and run by DPWH, couldn't cope with the volume of water in Wednesday's flooding ("dili na jud makaya," quoted one news report). That and other "band-aid" measures apparently are not enough when torrents pour long enough, said one councilor.

WHOM TO BLAME. The 2020 session on the Mambaling underpass problem gave a glimpse of whom to blame: DPWH, project implementor, for the most part.

But the City Government cannot escape responsibility for failure in oversight: whether the city acts alone or with central government, city officials must own blame along with the credit if any. Congressman Abellanosa, who sponsored the project, should've seen to it that the underpass was built to serve its purpose, given the suffering it caused to the public during construction.

As between the city executive department and local legislators, the responsibility must also be shared. Both the mayor and his city administrator, on one side, and VM Rama and the other members of the City Council have roles to play in actual execution and overseeing the work. That was especially true because of the top premium the Barug administration placed on flooding in its 2019 election platform.

Mike Rama repeatedly said at the Sanggunian last year that if he were the mayor, he would've already been calling a lot of meetings and visiting the site to identify the cause and adopt a solution. His "Let's-do-it-now," gung-ho mantra suggested that the mayor, his party colleague, could've done better.

The function of seeing to it that DPWH did its job well on a project that rightly concerns Cebu City and more urgently belongs to the City Government. The Sanggunian tried to do its part last October; the mayor his, this week.

Too little, too late? As long as the floods continue, what the public officials do to set things right are useful and relevant.