How to talk to believers of Covid-19 conspiracy theories 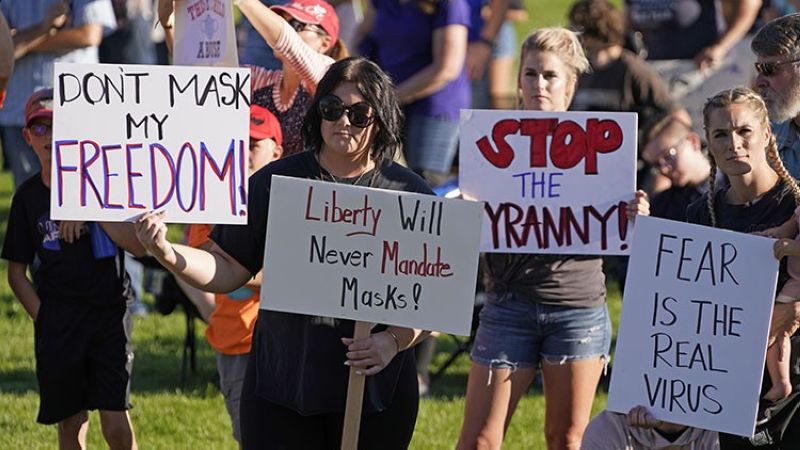 In this Sept. 5, 2020, file photo, people gather during a "Trash Your Mask Protest" rally hosted by the Utah Business Revival at the Utah State Capitol in Salt lake City. Psychology experts offer several suggestions for talking to friends and family who believe conspiracy theories about Covid-19. Instead of lecturing or mocking, listen and ask them why they believe what they believe. (AP file photo)

Conspiracy theories about Covid-19 are causing real-world problems by discouraging some people from getting vaccinated, wearing masks or following other guidelines. Some bizarre theories about the virus have prompted believers to burn 5G cell towers, shut down vaccination clinics or even ingest poisons touted as cures.

Experts on misinformation and psychology interviewed by The Associated Press offer several tips for individuals wondering how to talk to friends or family who believe conspiracy theories about Covid-19. Here's what they suggest:

LISTEN, DON’T PREACH: Believers in conspiracy theories aren’t likely to be swayed by people who mock their views. Instead of lecturing, listen and ask questions about how they became interested in the conspiracy theory, where they get their information, and whether they've considered other explanations. Whenever possible, have the conversation offline.

STAY CALM: Arguing with someone about conspiracy theories is likely to result only in higher blood pressure. Remember that some people won't change their mind no matter what you say, and arguing over the proven benefits of mask wearing or vaccines isn't likely to convince them.

CHANGE THE SUBJECT: Bring up shared experiences and interests to help the person focus on personal connections. If someone dwells on the conspiracy theory, politely say you’d rather talk about something else.

As for increasing your own defenses against conspiracy theories and misinformation about the virus (or any other topic), experts suggest the following:

EXPAND YOUR MEDIA DIET: Checking a variety of news sources — including some mainstream local, national and international outlets — is the best way of staying informed and avoiding rabbit holes of misinformation and conspiracy theories. Don’t rely solely on social media for your news.

CHECK SOURCES: Look to see who wrote the content, and who is quoted in it. Are they named? Do they have a position, or experience, that lends credibility to their claims? Are other viewpoints expressed in the article? Be wary of claims made by “insiders,” anonymous internet posters or anyone citing hearsay as fact.

BE WARY OF CONTENT THAT PLAYS ON EMOTIONS: Misinformation and conspiracy theories often exploit anger, fear or other emotions. Be cautious of content that features strongly emotional language, or that seems intended to make you outraged. If you read something that really gets you fired up, wait until your emotions have cooled before reposting or sending to friends.

VERIFY EXTRAORDINARY CLAIMS: If you read something that makes an incredible claim — one that seems too good, too awful or too weird to be true — check to see if it’s being reported elsewhere. If it’s an important story, other outlets will confirm the details. Be cautious of explosive claims if they’re only being made on one website or by one social media user.

GET OFFLINE: The pandemic has been a time of heightened stress and fear for everyone, and there are many legitimate questions about the virus. Experts say healthy habits like exercise, meditation, positive relationships, volunteering and even hobbies can ease some of the dread — and make us more resistant to misinformation and conspiracy theories that exploit our fear or anger. (AP)