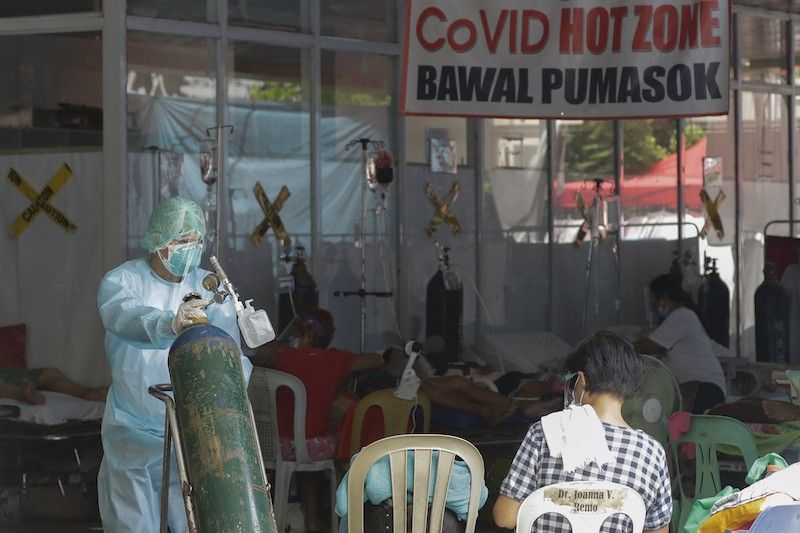 MANILA. A health worker wearing a protective suit pushes an oxygen tank outside the Amang Rodriguez Memorial Medical Center emergency area as they wait for rooms to be vacated in Marikina on March 26, 2021. (File)

THE death toll from coronavirus disease 2019 (Covid-19) in the country surpassed 14,000 on Wednesday, April 7, 2021, as the Department of Health (DOH) reported more than 200 additional mortalities for the second day in a row.

In its case bulletin Wednesday, the DOH listed 242 deaths, the second highest daily death toll after the 382 mortalities reported on April 6.

These brought the cumulative deaths to 14,059 as of April 7. The case fatality rate increased to 1.72 percent.

The DOH case bulletin also listed 6,414 new infections, fewer than the seven-day average of over 10,000, as fewer samples were submitted for processing.

“The relatively lower number of cases today is due to the low number of samples received by laboratories on Monday, April 5,” the DOH bulletin stated.

The new infections brought the cumulative case count to 819,164, of which 158,701 or 19.4 percent were active cases in hospitals and isolation facilities.

There were 163 new recoveries, which brought the total to 646,404 or 78.9 percent of the total case count. (Marites Villamor-Ilano / SunStar Philippines)