Family massacred inside home in Bacolod 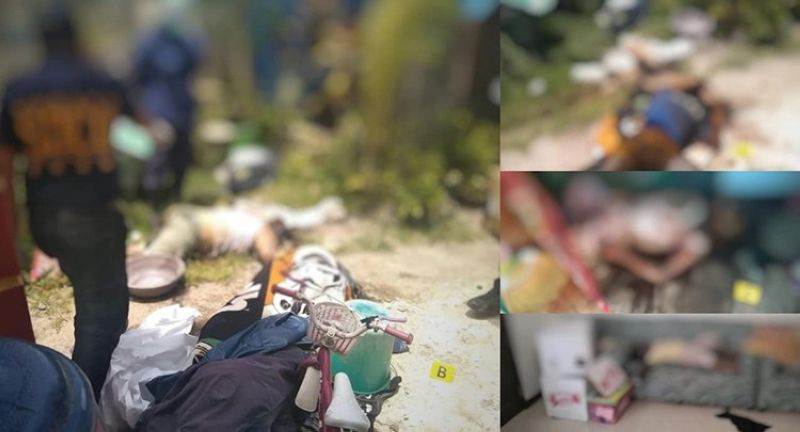 FOUR family members were found in an advanced state of decomposition Wednesday morning, April 7, in what police believe is a massacre in Barangay Tangub, Bacolod City.

Police Major Joery Puerto, Police Station 8 commander, said based on their initial investigation, a certain Jona Delo Santos received a phone call from Jonel Benjamin, a relative to the victims, stating that Jocelyn was not answering her mobile phone.

Delo Santos immediately contacted police and when they went to the victims' house they discovered the remains in different parts of the house either wrapped in blankets or cardboard boxes.

Puerto said initial examination of the remains revealed that all of the victims were hit in the head using a hard object. The remains were immediately transported to a funeral home in the city to determine if the victims had incurred other wounds, which would have led to their deaths.

Puerto also believes that there may be at least two perpetrators in the massacre, as some of the bodies have clearly been dragged or moved from where they were attacked.

Scene of the Crime Operatives (Soco) have also arrived to gather evidence in the crime scene and some of the swabs have been taken for DNA test. The victims were believed to have been dead for at least two to three days already.

Soco also recovered one of the victims' mobile phones, which was also sent for analysis.

Puerto said they interviewed some of the neighbors and aside from the smell, they have not heard any noise that may suggest a struggle had taken place.

Police have also ruled out that a robbery may have taken place as the victims' valuables have all been accounted for.

In a follow-up operation Wednesday afternoon, personnel of Police Station 8 went to Don Salvador Benedicto town to invite for interrogation Christian Don Tulot, who was considered a person of interest.

One of the victims' relatives said Tulot introduced himself as their relative and was allowed to stay with them.

During the interrogation at the police station, authorities asked him to show all his belongings.

Five sachets of shabu were found in his wallet. The illegal drugs weighing about a gram have an estimated value of P6,800.

He denied killing the victims, saying he went home to Don Salvador Benedicto to get his salary.

Tulot said he surrendered to clear his name.

Puerto said they will get the sample of Tulot's fingerprint and match it with those found from the crime scene.

The police, however, noted inconsistencies in his statements.

Puerto also said that they will verify if the motorcycle used by Tulot is the same motorcycle that has been reported missing from the victims' residence.

Jen Espinosa, another relative of the victims, said they have no idea on who is responsible for the crime.

Espinosa told SunStar Bacolod that the victims have no enemies so they were shocked about what happened.

"We were just informed through a phone call. We saw each other last April 1," she said, adding that the victims have been living in the house for quite some time and they have not heard that the victims were involved in a conflict.