EXPLAINER: When an LGU must decide between heritage and public safety. Law calls for caution in demolishing Sibonga's 50-year-old arch. 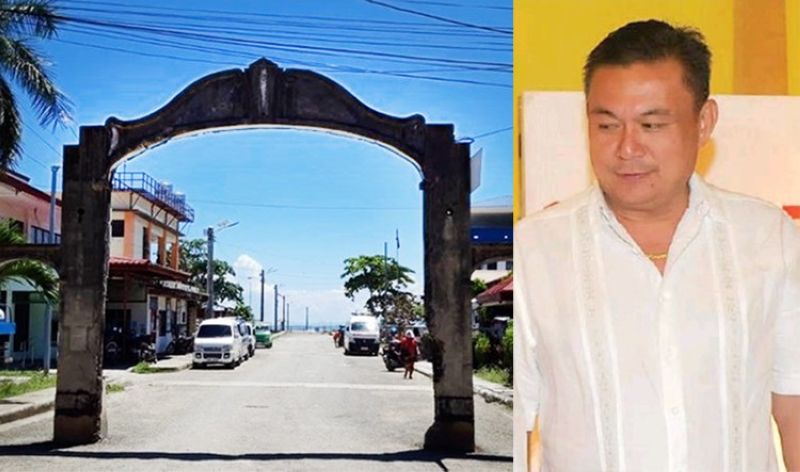 CEBU. The arch at the entrance of the municipal wharf in Sibonga and Mayor Lionel Bacaltos. (Contributed/SunStar File)

"INSIDE Sibonga," a Facebook page, has been conducting an informal survey on the fate of the arch at the entrance to the municipal wharf, which the Sibonga Municipal Council, upon the request of Mayor Lionel E. Bacaltos, decided last December 15, 2020 to demolish.

The survey question in Cebuano-Bisaya: "Are you in favor of removing this arch from our town Sibonga?" So far, the question drew 540 likes and 36 shares. Many comments in response to the survey were negative: "What for?" "Sibonga has many other problems."

The random polling comes some four months after the town Sanggunian voted, 9 to 1, for the demolition. Resolution #11-189-2020 as sponsored by Councilors Cirilo Apuda, Daniel Sarnillo and Caroline Bacaltos, chairpersons of the committees on laws, municipal properties and tourism, respectively. The reasons why they pushed for the removal of the arch:

[1] Its unsafe condtion: "dilapidated, with concrete peeling and steel bars exposed," in danger of falling anytime and thus critical because of its "age, wear and tear, including impact of vehicles during accidents."

[2] Traffic obstruction: restricts access to widened road leading to sites of a number of municipal offices, including the health office, senior citizens' affairs office, and the fire service. The port itself has long been idle.

CASE FOR OTHER LGUs TOO. The December 15 resolution recognized history and heritage, declaring that "this administration wants to preserve old structures" but it argued that it is also the duty of public officials "as servant leaders to provide their constituents the convenience, opportunities, safety and security that they deserve."

Preserving heritage as against assuring public safety. That is not a situation unique to Sibonga as other local governments at times are confronted with the hard choice. Not long ago, the Capitol project of a high-rise building was met with opposition that presented multiple grounds of objection, notably its failure to secure prior approval of the National Historical Commission of the Philippines (NHCP). A change of administrations shot down the project.

In the Sibonga's "arko" case, Councilor Gina Patalinghug, the lone dissenter, wanted to secure the advice or approval of the NHCP (under the law, the National Historical Institute) and wait for its reply. What if the arch is already demolished when the reply comes? she asked her colleagues.

PRESUMPTION OF CULTURAL IMPORTANCE. Under National Cultural Heritage Act of 2009 (Republic Act 1066), the works considered "important cultural property," unless declared otherwise by the National Historical Institute, include (under letter "f") "structures dating at least 50 years old." That would cover the Sibonga arch, if it is in fact five decades old or older.

The LGU under the same law is required (a) to make an annual inventory of cultural properties and (b) to monitor the status of the said properties, furnishing the NHI with a report of the function.

What if the local government -- in this case, Sibonga -- has not included the wharf arch in the Philippine Register of Cultural Properties? The cultural importance is legally presumed and Sibonga has to apply to NHI for removal of the presumption so as to legalize the demolition. The reason for the law, RA 1066 says, is "to protect a cultural property against exportation, modification or demolition." Strictly speaking, the LGU cannot even modify the structure without NHI's approval.

The Sibonga Sanggunian resolution giving Mayor Bacaltos the go-signal to tear down the arch cited the need for easier traffic flow in that part of the town. Development is part of the component of the decision. Jesse Paolo Pananganan, in a comment included in the Inside Sibonga FB post, said history and development "can 'jive' together," "walay angay masakripisyo bisa'g (usa) anang duha." The session's minutes said Councilor Patalinghug asked if there was a development project being planned. Councilor Apuda said there was.

CAUTION BY LOCAL OFFICIALS. It is apparent from Sibonga officials' moves that it is being careful about removing the arch. Even though the Sanggunian approved the mayor's request last December yet, Mayor Bacaltos still had to demolish the arch. As of Thursday, April 8, it was reportedly still standing.

Noteworthy is the comment of the two committee reports that should the (NHI) "recommend the fabrication of the 'arko,' and installing it at a prominent place, the Municipality would abide (by) its recommendation." That is a fall-back that suggests respect for NHI's right and duty.

That is abundance of caution, which an LGU, concerned about development and public safety along with history and culture, must exercise.

Disclosure: Seares was born and grew up in Sibonga and had served as municipal secretary, then councilor.