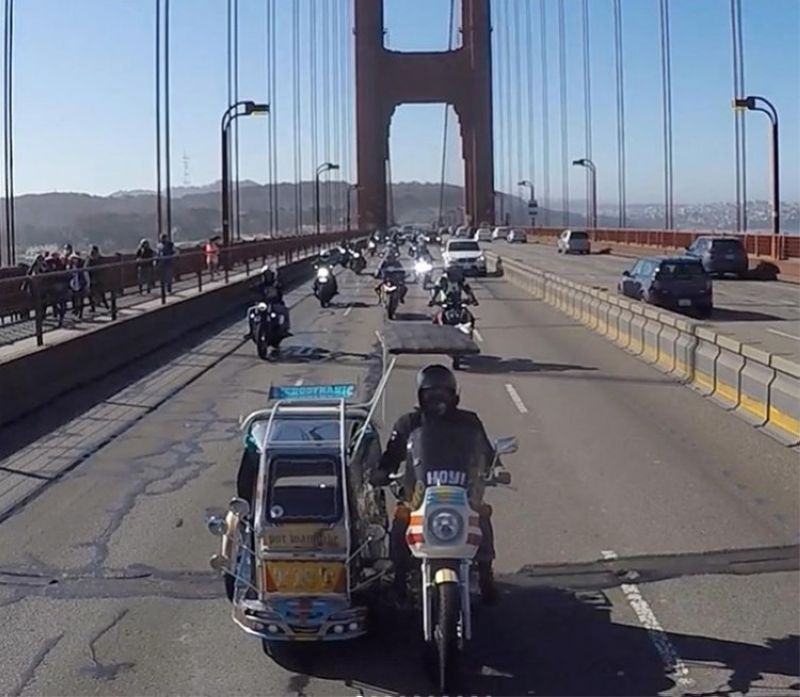 WHO would have thought that a Filipino tricycle, like the one you see roaming around Philippine streets, would one day cross the Golden Gate Bridge in the United States?

TNT Traysikel made history by becoming the first Filipino tricycle to cross California's bridge. It was joined by 60 motorcycles with Filipino-American riders.

In an Instagram post, Arcega proudly said: "We crossed the Golden Gate Bridge with @tnt_traysikel and over 60+ Pinoy riders from the @norcalpinoyriders group."

"It was amazing to see so many Pinoys get excited. News traveled to the Philippines and folks are sharing," he added.

"TNT Traysikel was a hit with this group of more than 60 Filipino Americans on motorcycles that showed up for this meetup and ride (more than 400 members on the Facebook group). It was great to meet so many pinoys on 2 wheels. And what a sight it was to see a Filipino Traysikel crossing the Golden Gate Bridge followed by a bunch of Filipinos on motorcycles!!" another Instagram post read.

The tricycle is adorned with yellow curtain tassels and blue yarn balls, and words like “Hoy,” “TNT,” “Por Wan Pibe,” and “Basta Driver Sweet Lover,” as well as shapes are written and drawn on its body, sidecar and windshield.

“Hoy” is the word Filipinos use to call someone’s attention, while TNT stands for “Tago ng Tago,” referring to undocumented Filipino immigrants.

In California, under Penal Code 415, it is considered a crime if you play excessively loud music, get into a fight with someone, or use fighting words or offensive language.

Arcega and Asuncion said in their posts that those words and shapes were hand-painted by their friend, Meng Ngyuen.

“The aesthetic of the traysikel is adjacent to Filipino-customized transport jeepneys left by Americans after WWII. TNT Traysikel is an immigrant metaphor constructed from a deep colonial history,” TNT Traysikel said in an Instagram post.

But as a social sculpture, the mobile art work was used “as an aesthetic object, a protest tool and symbol of solidarity with the Black community against police brutality and delivery vehicle during the Covid-19 pandemic,” said Arcega in his website.

TNT Traysikel was also created as “the main site for collecting stories of Filipinx diaspora in a forthcoming documentary.”

“Come ride a Filipino style trike around San Francisco while singing karaoke while talking to us about your superhero origin story and your super powers. TNT SideCaraoke is a rolling karaoke interview show all about Filipinos and the Filipino American experience,” another post stated.