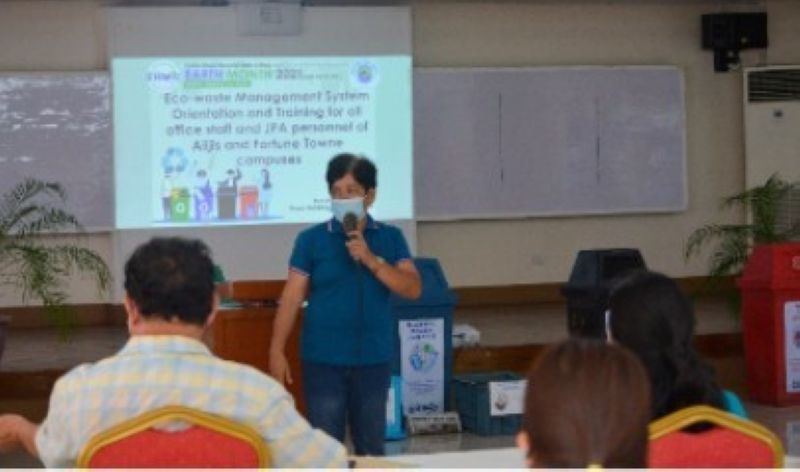 THE Eco-waste Management Team under the Greening CHMSC Task Force in collaboration with the Center for External Affairs and the Supreme Student Government (SSG) Carlos Hilado Memorial State College conducted a half-day orientation and training to a group of faculty, office heads, office staff, and JPA personnel on Thursday, April 8, from 1:30 to 4 p.m. at the Green Building, Talisay Campus.

The orientation started with an opening song entitled Kapaligiran which was rendered by SSG President Sherwin Macahilig. It was followed by an introduction to the school’s policy-based Ecological Waste Management System and a brief overview of the Earth Month celebration presented by Rhoderick K. Samonte, chair of the Greening CHMSC Task Force and Director for External Affairs.

Janet P. Estimar, team leader of the Eco-waste Management Team, gave a lecture presentation detailing the school’s Ecological Waste Management System and emphasizing the right use of the color-coded bins, the no segregation no collection policy, and the coded schedule of waste collection in all offices, faculty rooms, and workstations. The two executive directors gave their responses on behalf of the participants with an assurance to fully implement the EWMS in their respective campuses.

The orientation culminated with a ceremonial trash-picking and segregation activity against a background song entitled, "We’re All in this Together" performed by volunteers from the SSG. The half-day orientation and training ended with a unity song, This is our world, and the singing of the CHMSC Hymn.

Minimum health protocols were strictly observed during the ceremony and face masks were temporarily removed during the photo-op only. (PR)