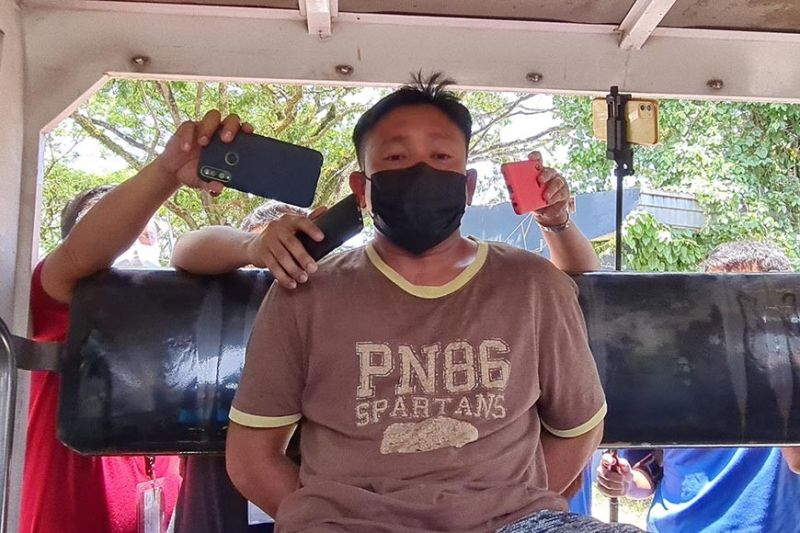 BACOLOD. Christian Tulot, one of the suspects in the killings of his four relatives inside their house at Barangay Tangub in Bacolod City recently, confesses that he witnessed the crime in an interview with the media at the Police Station 8 in the city Thursday, April 8, 2021. (Erwin P. Nicavera photo)

“NAKULBAAN ko (I was afraid).”

This was the reason of 39-year-old Christian Tulot on why he did not tell the truth immediately to authorities after witnessing the gruesome killings of his four relatives, whose decomposing bodies were found in their compound at Gardenville Subdivision, Barangay Tangub, Bacolod City on Wednesday morning, April 7, 2021.

He said his conscience has since stricken him and decided to confess to authorities Thursday, a day after he was invited to the police station for interrogation.

Tulot, in a media interview, admitted that he had participation in the murders of his aunts Jocelyn Nombre, 59, and Gemma Espinosa, 69; his cousin John Michael, 35; and the latter’s daughter, Precious, 6.

The Concepcion town, Iloilo-native, however, asserted that he has no direct hands on the killings.

He pointed two other suspects whom he named as a certain “Bro” and Joel Espinosa, the brother of Jocelyn and Gemma.

Tulot said the incident happened around 9 a.m. on Easter Sunday when he arrived at their house and found John Michael having a drinking spree with Bro and Joel.

A few minutes later, an argument ensued between John Michael and Bro.

Tulot said the former failed to pay the P35,000 dues to the latter over an alleged illegal drug transaction.

“Following the altercation, Bro killed first John Michael by hitting him on the head using a hammer,” he said.

Hearing the commotion, Jocelyn came out. She was also hit on the head with a hammer by Bro, while her brother, Joel, held her hands, Tulot said.

He said Gemma was later killed in a hut outside the house. His aunt, Jocelyn, tried to seek help but failed. Tulot said he grabbed Jocelyn, which in turn left scratches on his skin.

“Wala ko mahimo (I can't do anything),” he said, adding “ginatayaan ya na ko,” referring to his uncle, Joel, who allegedly pointed a cane knife at him.

When asked who killed the child, Tulot said he did not witness the killing of his niece, who was awake when the crime happened.

“Buhi pa siya paghalin ko (the child was still alive when I left),” he said, adding that he immediately went to Don Salvador Benedicto as feared for his life.

“Sila ang nag-ubos patay. Wala ko ya (The two killed all the victims. I am not part of it),” Tulot said.

Authorities on Thursday filed charges for violation of Republic Act 9165 or Comprehensive Dangerous Drugs Act of 2022 against Tulot after five sachets of suspected shabu worth P6,800 were seized from his possession during the interrogation.

Tulot admitted that he was using illegal drugs.

Police Station 8 commander Major Joerey Puerto said the drug charges were on top of the multiple murder case they will file against him and two other suspects.

Puerto said from being a person of interest, Tulot is now considered a suspect in the crime.

Tulot admitted that he prevented Jocelyn from asking for help, he said.

"They cannot make him (Tulot) as a witness, as circumstances showed that he also has a participation in committing the crime," Puerto added.

“He just confessed because his conscience is possibly disturbing him. The effects of the drugs he used had probably subsided that is why we were able to talk to him well,” Puerto added.

Puerto also confirmed that Joel was already in their custody, although they are having difficulties talking to the suspect.

“He is not admitting anything yet,” the station commander said, adding that there was no confession nor admittance on the part of Joel, who was apprehended Thursday.

As of Thursday, authorities have no lead yet as to the identity and whereabouts of Bro.

They are also waiting for the result of the autopsy to ascertain the cause of the victims’ death and if they only sustained head injuries when they were hammered or if they also had hack wounds.

It can be recalled that on Wednesday morning, a certain Jona Delos Santos received a phone call from Jonel Benjamin, a relative to the victims, stating that Jocelyn was not answering her mobile phone.

Delos Santos immediately contacted the police and when they went to the victims' house, discovered their remains in different areas around 10 a.m.

The child’s body was found on a sofa while that of his father and Jocelyn were wrapped in a blanket. Gemma was found dead inside the hut.

"We salute the Bacolod City Police Office, led by Colonel Manuel Placido, for immediately solving the gruesome massacre that happened in Barangay Tangub. Particularly, we recognize the expertise and efficiency of Station 8 Commander PMajor Joery Puerto and his men in handling the investigation," the mayor said.

"While it was an unfortunate and very sad incident, we hope that it will never happen again. The swift action and solution by our policemen give us a sense of assurance that in Bacolod, crime does not pay," he added.

Vice Mayor El Cid Familiaran also lauded BCPO personnel for the "speedy resolution" of the case in coordination with other police units in Negros Occidental.

Familiaran said the cooperation of the civilians was a big help in solving the case. He said the city government also intensified its campaign against illegal drugs in various barangays in the city.

“We cannot do it alone. We need the cooperation of everybody here to address this problem,” he said.

The vice mayor added that most of the suspects who were involved in brutal killings were drug users or having involvement in illegal drug activities.

“So for our youth, please don’t try to engage in illegal drugs. It will only destroy your dreams including your families,” the official said.