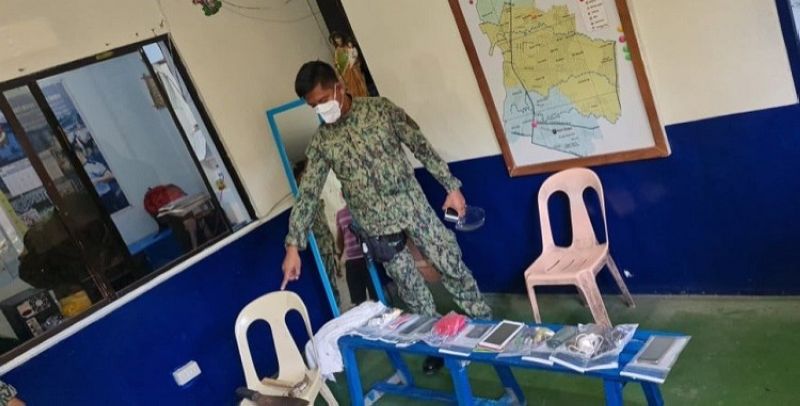 BACOLOD. Police Station 8 Commander Major Joerey Puerto shows the evidences on the recent killings of four family members at Barangay Tangub in Bacolod City. The hammer and cane cutter were recovered from the house of the victims while the gadgets, jewelries and other items allegedly stolen by the suspect, Christian Tulot, were recovered from his friend’s house at Barangay Bunga in Don Salvador Benedicto on Thursday. (Erwin P. Nicavera photo)

THE suspect in the killing of the four family members at Gardenville Subdivision in Barangay Tangub, Bacolod City has retracted his statement he made with the police.

Police Major Joerey Puerto, chief of Police Station 8, said Friday, April 9, 2021, that Christian Tulot, who earlier confessed that he was involved in the killings of his four relatives along with his alleged two companions, retracted his statement, claiming that he is the lone suspect in the killing of Jocelyn Nombre, 59; Gemma Espinosa, 69; Michael Espinosa, 35; and Precious Espinosa, 6.

Tulot earlier mentioned that he only witnessed the crime and it was his uncle Joel Espinosa, a brother of Jocelyn and Gemma, and a certain “Bro” who killed the victims using a hammer and cane machete.

On Wednesday afternoon, personnel of Police Station 8 went to Don Salvador Benedicto town to invite for interrogation Tulot, who was considered a person of interest.

During the interrogation at the police station, authorities asked him to show all his belongings.

Five sachets of shabu were found in his wallet. The illegal drugs weighing about a gram have an estimated value of P6,800.

Tulot also admitted that he was using illegal drugs.

“There’s a possibility that he’s still high on illegal drugs that’s why he is making different statements,” Puerto said.

He at first denied that he had participated in the killing of the victims, where he pointed to his uncle and "Bro" as perpetrators.

The police still have doubts on the statement of the suspect since he has yet to make a confession with a lawyer.

“For now, we will focus on the suspect since we have strong evidence against him,” Puerto said.

The police already filed a complaint before the City Prosecutor’s Office against Tulot for violation of Section 11 of Republic Act 9165 or the Comprehensive Dangerous Drugs Act of 2002.

Puerto said they will also file multiple murder with robbery complaint against the suspect, who was detained at station’s custodial facility.