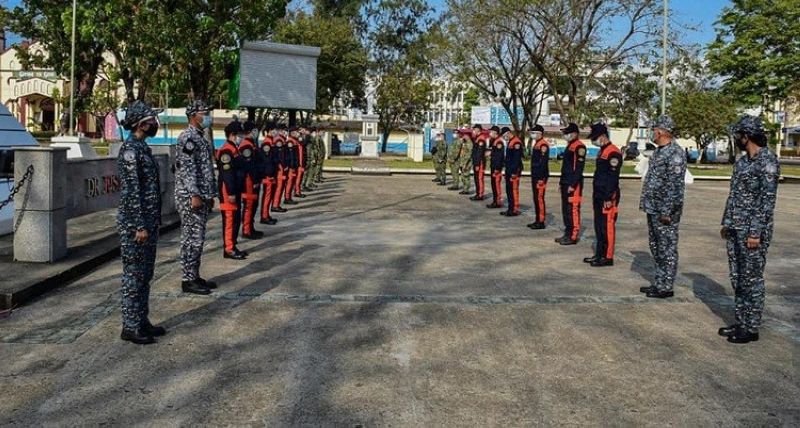 SAN CARLOS. Personnel of the Philippine National Police, military, and Bureau of Fire Protection join the commemoration of the 79th Araw ng Kagitingan in San Carlos City Friday, April 9, 2021. The city government pays tribute to the fallen heroes who fought during World War II by offering flowers to the unknown statue at the public plaza. (San Carlos LGU photo)

“WE SHOULD restore our courage and nationalism on this day of valor.”

This was stressed by labor leader Wennie Sancho as the country commemorated the 79th Araw ng Kagitingan Friday, April 9, 2021.

Sancho, who is the secretary general of the General Alliance of Workers Associations (Gawa), said the labor sector recalled the courage and bravery of Filipino and American soldiers during World War II.

Majority of them joined the infamous Death March, only 54,000 of the 76,000 reached their destination.

Sancho said history is replete with stories of heroism, bravery and martyrdom of Filipinos who would rather die fighting than allow foreign invaders to occupy the country’s sacred shores.

From the Spanish to the American revolution, thousands gave their lives so that freedom shall live, he said.

“It is unfortunate that our commemoration of the Fall of Bataan is synonymous with the Fall of the West Philippine Sea into the hands of the Chinese intruders,” Sancho said, adding that “this is a flagrant violation of our sovereignty as a nation and as a people.”

The labor leader said the Philippine Constitution has declared that it is the obligation of every generation of Filipinos to love and care for their national patrimony, to conserve and develop it for the benefit of succeeding generations.

Furthermore, the state shall protect the nation’s marine wealth in its archipelagic waters, territorial sea and exclusive economic zone and reserve its use and enjoyment exclusively to Filipino citizens, he said.

Sancho, also the labor representative to the Regional Tripartite Wages and Productivity Board (RTWPB) in Western Visayas, claimed that the Chinese had occupied and claimed the West Philippine Sea as their territory and they had built structures on small islands and reefs that are parts of our territory.

“With the presence of more than a hundred ships, this is an outright invasion of our archipelagic waters let alone the plunder of our maritime resources and the destruction of our maritime environment causing irreparable damage,” he said.

He added that “it has also deprived hundreds of Filipino fisherman of their only means of livelihood.”

The Gawa official cited that some government officials have already filed a series of diplomatic protests and issued strongly-worded statements that this armada of Chinese vessels should leave immediately.

"But their appeal fell on deaf ears. The Chinese are here to stay in our territory which they claim as their own," he said.

The local labor leader believed that the foreign policy on this crucial issue of sovereignty is confusing.

Sancho said it seemed that the national leadership allegedly adopted a policy anchored on the principle that “silence is golden.”

"At the same time, it seems to apply the three monkey principle to, hear no evil, see no evil and speak no evil," he said.

“Our government should abandon the appeasement policy towards China who had taken advantage of our being prudent and circumspect,” Sancho said.

Sancho said there is a need to raise the issue to other international bodies in the United Nations.

“If we shall remain passive and unaffected it will appear that China is the bully and we are the coward. This would negate our commemoration of the Day of Valor,” he added.