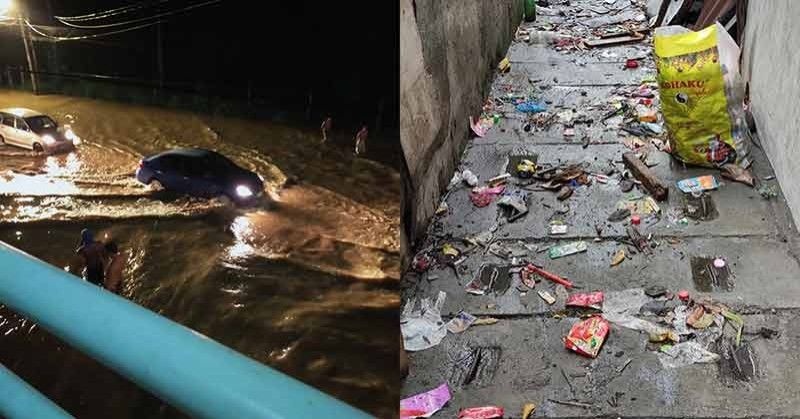 In a forwarded statement, Interfacing Development Interventions (Idis) Executive Director Mark Penalver said the incident "serves as an eye-opener for the public and our policymakers" to integrate policies that would be responsive in addressing the longtime flooding problem in the city.

He said plastics had a contribution to the city's flooding problem.

"The flooding last night is heartbreaking and a very unfortunate situation to look at. The aftermath is no different. Seeing a lot of wastes (mostly plastics) carried by the flood is definitely problematic," Penalver said.

He added, "It shows how plastic contributes to the flooding situation in the city. More so, it reflects how much plastics are being generated by the city and how the city and the community is failing in managing its wastes."

With the current policy environment, Penalver encouraged policymakers to come up with a "stricter" policy that would address plastic pollution.

"Let us not also forget to make those who produce these plastic wastes accountable and responsible. They are as guilty for the effects that brought about by their unsustainable practices," he said.

"Davao City has long been fighting floods and last night is proof that the city has still a long way to go," SDM said.

The group also cited the "lackadaisical attitude" of the public and authorities as factors that contribute to cities experiencing standstill after heavy rains.

"In addition, citizens also have to behave responsibly and ensure that plastics are not thrown in the open or in the neighborhood drains," SDM said.

SDM is a coalition of environmental multi-sectoral organizations in Davao City and is composed of Idis, Ecoteneo, Limadol, Break free from Plastic, and Ecowaste Coalition.

In a report from the Davao City Disaster Risk Reduction and Management Office posted on the Davao City government Facebook page at 5:46 p.m., the city experienced moderate to heavy rains in some areas of Talomo, Toril, and Poblacion districts and also other nearby areas, while light rains to moderate rains were being experienced in some areas of Baguio, Tugbok, and Calinan Districts.

No forced evacuation was reported, although below-knee water level was reported by some residents online.

Some parts of the downtown area also experienced below-knee flood levels right after the heavy rain.

SunStar Davao reached out to CDRRMO Head Alfredo Baluran for updates on the aftermath of the flooding incident, but he has not responded as of press time.

The City Information Office has also not issued any press release on Saturday's flooding.

Flooding in other areas

In a press release, 1,130 families were affected by the flash floods in Barangay San Miguel.

Relief efforts for the affected families are ongoing.

Meanwhile, six families with 22 individuals were severely affected by another flash flood in Barangay Macambol in Mati City on Saturday evening, April 10.

Four houses are said to be the most affected by the flooding damaging their house and personal belongings.

Thirty more houses were also affected by the flooding but there was no damage reported in the said household.