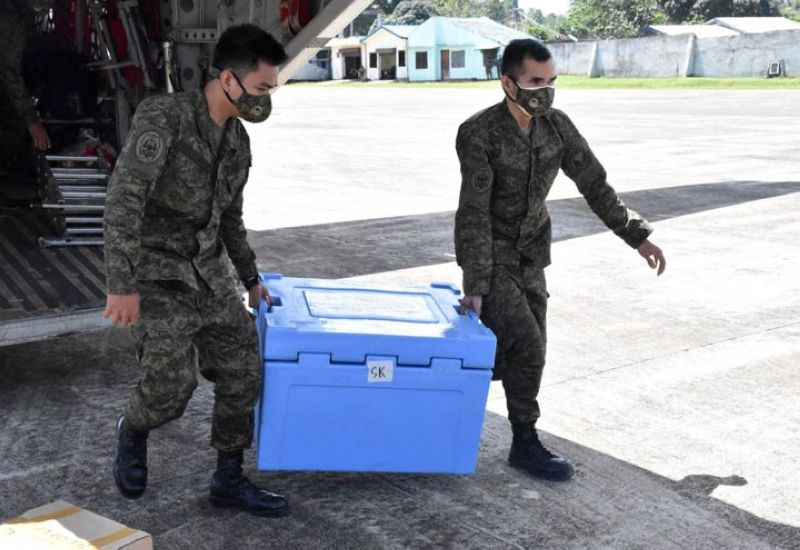 ZAMBOANGA. The Philippine Air Force (PAF) assists in the delivery of another batch of coronavirus disease (Covid-19) vaccines to the island province of Sulu. A photo handout shows soldiers assist Monday, April 12, in the unloading the boxes of vaccines from a military plane at Jolo airport. (SunStar Zamboanga)

THE Armed Forces of the Philippines (AFP), through the Philippine Air Force (PAF), has assisted in the delivery of another batch of coronavirus disease (Covid-19) vaccines to the island province of Sulu, officials said Tuesday, April 13.

Sangkula was assisted by Lieutenant Colonel Nomar Alinsangan, tactical operations group Sulu-Tawi-Tawi commander, in transporting the vaccines to the IPHO.

Sangkula said the vaccines are intended for the medical frontliners of Sulu, including the health workers of Camp General Teodulfo Bautista Station Hospital, the military medical facility in Jolo, Sulu.

Major General William Gonzales, 11th Infantry Division commander, is optimistic that most of the military medical frontliners, including personnel in charge of delivering medical supplies, will all soon be vaccinated.

"In fact, 300 personnel will receive their second dose of CoronaVac this mid-April," Gonzales said. (SunStar Zamboanga)