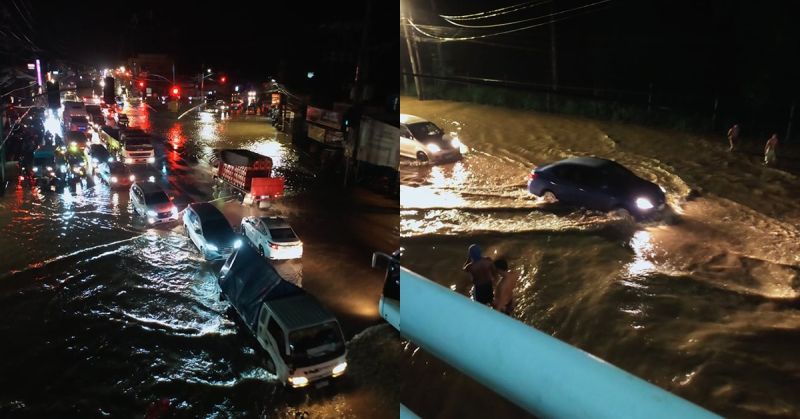 In a radio interview on Monday, April 12, the mayor said the Davao City Disaster Risk Reduction and Management Office (CDRRMO) reported during their department heads meeting the list of areas that were flooded on Saturday evening.

“Barado ang drainage. Ang monitoring report sa street flooding akong giingnan na ipasa sa City Engineer’s Office (CEO) aron maka-review sila og unsay hinungdan. Pero mubalik gihapon na sa barado tungod sa naglain-laing mga rason (The drainage [systems] were clogged. I told CDRRMO to forward their monitoring report on street flooding to the City Engineer’s Office so they can review it and find out the cause. But it will all boil down to clogged drainage due to several reasons)," Duterte-Carpio said in an interview on 87.5 FM Davao City Disaster Radio.

She said there have been drainage projects and interventions that were made to address flooding in some flood-prone areas but even after that, flooding still happens in other areas.

The mayor said the CDRRMO street flooding report is vital. The report consists of the list of areas and streets that were flooded and are flood-prone.

She said the list was already forward to the CEO for them to check if the Department of Public Works and Highways has drainage projects in these areas.

The mayor also noticed that flood incidents or overflow of water level occur in other areas when there are accomplished drainage projects.

She also bared the usual reasons for the flooding, including private lot owners block the natural waterways as the water passes through their private properties, while some homeowners create their own drainage system that does not connect to the water path.

Duterte-Carpio also said that the usual reasons for the flooding include undisciplined disposal of garbage in canals.

This includes stricter regulations to address plastic pollution as various single-use plastic (SUP) wastes were on the streets in the aftermath of the flooding.

Meanwhile, CDRRMO chief Alfredo Baloran, in his monitoring report, said that several areas in 13 of the city’s barangays were affected by the April 10 flooding due to the heavy downpour caused by easterlies with localized thunderstorms.