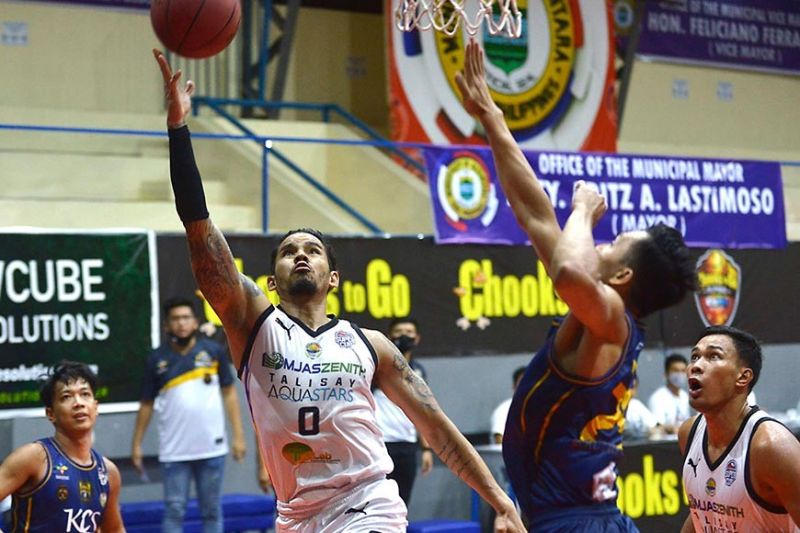 MJAS Zenith's Paulo Hubalde goes hard to the rack for a layup. / Chooks-to-Go

ALCANTARA—The MJAS Zenith-Talisay City Aquastars got the jump on the KCS Computer Specialist-Mandaue City and never looked back, authoring a 77-57 beatdown in the 2021 Chooks-to-Go Pilipinas VisMin Super Cup on Tuesday night at the Alcantara Civic Center in the town of Alcantara in the southern part of Cebu.

Athletic forward Jaymar Gimpayan came off the bench and had a spectacular ballgame as he tallied 25 points on 11-of-13 shooting. He also grabbed 10 rebounds and had an assist and a block to help MJAS Zenith capture its second win in as many games.

Val Acuña added 12 points including a pair of three-pointers near the end of the game that put an exclamation point on the emphatic win between two contenders in the Visayas leg.

MJAS Zenith was locked in from the get-go and held KCS scoreless for the first six minutes of the game while scoring 16 of their own to set the tempo of the game. KCS was able to trim the deficit to eight, 17-25, but the Aquastars got going once again, going on a 13-3 run capped off by a steal and a bucket by homegrown player Lugie Cuyos for a 38-20 lead.

KCS got into a groove and cut MJAS Zenith’s lead to eight, 36-44, but Gimpayan came in and gave the Aquastars a boost, scoring six points late in the third to give his team a 15-point lead, 58-43, heading to the final canto.

Gimpayan then poured it on in the fourth, tallying eight in the period including a fallaway jumper that beat the shot clock buzzer and gave MJAS Zenith an even 20-point bulge, 74-54, with 1:10 to go in the lopsided match.

Afterwards, MJAS Zenith head coach Aldrin Morante said it was important for his team to come out focused because they didn’t want to take KCS lightly.

He was also appreciative of Gimpayan’s breakout game as the athletic forward served as an outlet when Talisay’s big men got doubled in the post.

Al Francis Tamsi led KCS with 18 points as the team fell to 1-1. KCS shot themselves in the foot from beyond the three-point arc where they made just five of their 36 attempts.