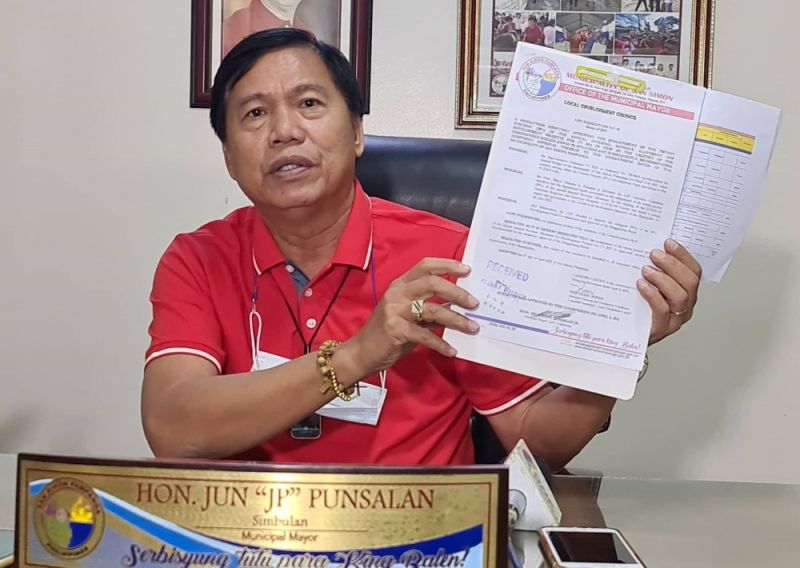 VACCINE FUNDS. San Simon Mayor Jun Punsalan shows a copy of the allocated budget of P9 million from the 20 percent IRA of the LGU to be used for the purchase of Covid-19 vaccines. (Chris Navarro)

This came not long after Vice Mayor Leonora Wong aired her concern over the local government's lack of funding allocation for the purchase of vaccine.

Mayor Abundio Punsalan Jr. said some P9 million were earmarked for vaccine procurement, aside from the P3.6 million initially allocated for Covid-related activities.

He said the funds were realigned from some projects included in the 2021 Development Projects as approved by the Local Development Council.

Punsalan also reiterated that the funding was not initially included in this year's budget as they were able to finish crafting it as early as November.

The mayor also asserted that the local government has been exerting all efforts in the fight against Covid-19 since the start of the pandemic.

"The funds for the vaccines have always been ready and we have finally re-aligned it to show our seriousness in combating this virus," he said.

Punsalan, meanwhile, took a swipe at Wong for not allocating funds for the purchase of vaccines when she assumed the mayoralty post from November 2020 to January 2021.

"She was hitting me for not including the purchase of vaccine in this year's vaccine when it was already finished in November. If she really wanted to, she could have done it herself during my suspension and she became the mayor," he said.

Wong, for her part, said she was not able to allocate funds for the vaccine as the 2021 budget was approved before Punsalan's preventive suspension took effect.

"They started crafting the budget as early as August and approved it right before he stepped down for his suspension so how can I include it in the budget?" she asked.

She also noted that the local budget officer was mostly on leave when she assumed the mayoral position for 60 days.

"He had all the time to think about the vaccine and include it in the budget but he decided not to. Now he is passing the blame on me when I only had two months and it coincided with the typhoon," Wong said.