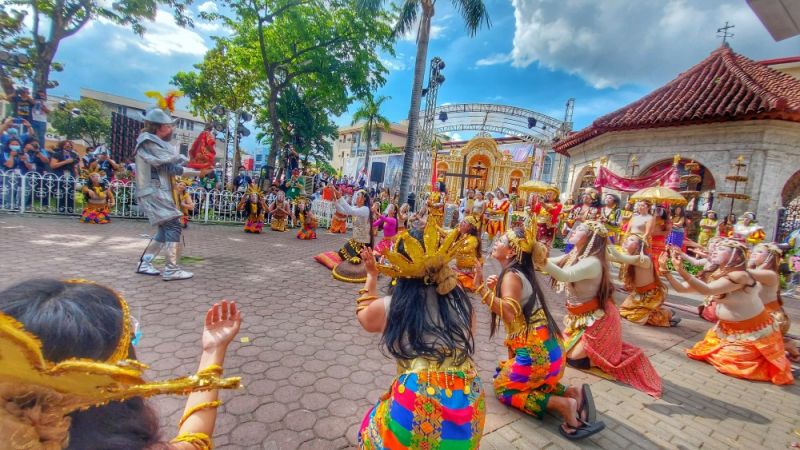 FIRST BAPTISM IN THE PHILIPPINES. The San Diego Dance Troupe and local personalities perform a dance reenactment of the first Catholic baptism in the Philippines at the Plaza Sugbo fronting the Magellan’s Cross and the Basilica Minore del Sto. Niño de Cebu in Cebu City Wednesday, April 14, 2021. Exactly 500 years ago, Rajah Humabon of Cebu and his wife, Hara Humamay, depicted above as the baptized Queen Juana with arms outstretched toward Portuguese explorer Ferdinand Magellan (holding the statue of the Sto. Niño), were baptized by the chaplain of Magellan’s expedition, Fr. Pedro de Valderrama. (AMPER CAMPAÑA) 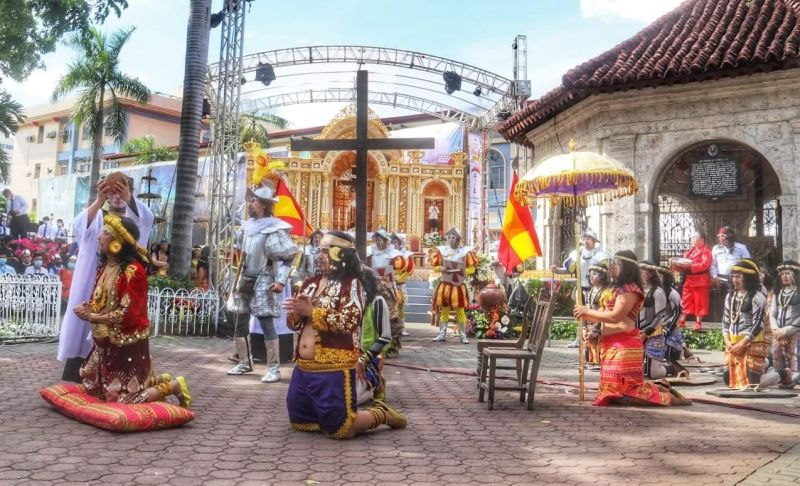 PAST IMAGINED. Actors reenact the first baptism at the Magellan’s Cross in Cebu City on Wednesday, April 14, 2021. Five hundred years ago, Rajah Humabon and his men were baptized as Christians, and the ceremony began with the planting of a wooden cross (a replica of which stands today in what is called Magellan’s Kiosk). In the afternoon of April 14, 1521, Humabon’s wife and other women were also baptized. On this occasion, Humabon’s wife, Juana, received the image of the Sto. Niño as a gift. (Cebuano Studies Center) / AMPER CAMPAÑA 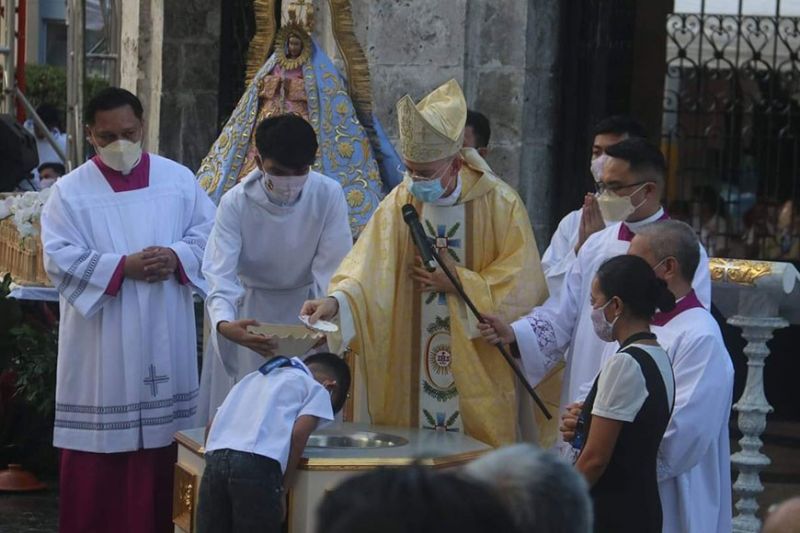 BLESSING. Papal Nuncio to the Philippines Archbishop Charles Brown baptizes a boy during the pontifical mass for the quincentennial commemoration of the first baptism in the archipelago held in Cebu City on Wednesday, April 14, 2021. / AMPER CAMPAÑA 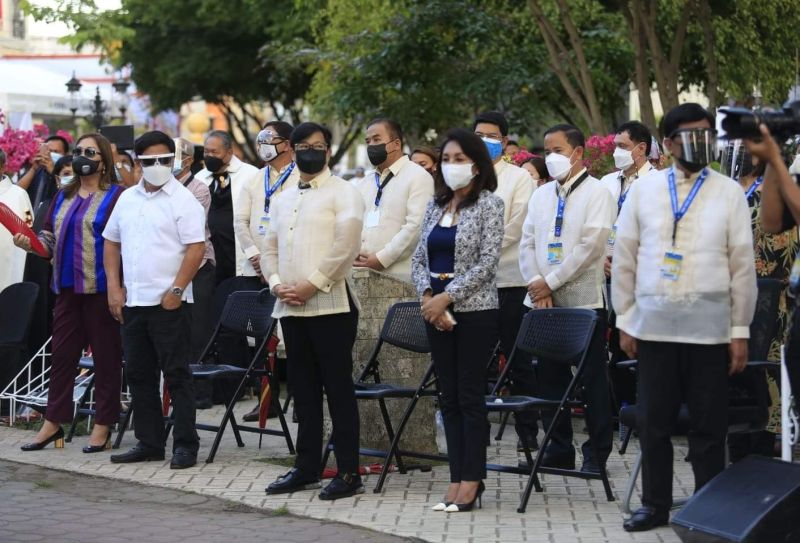 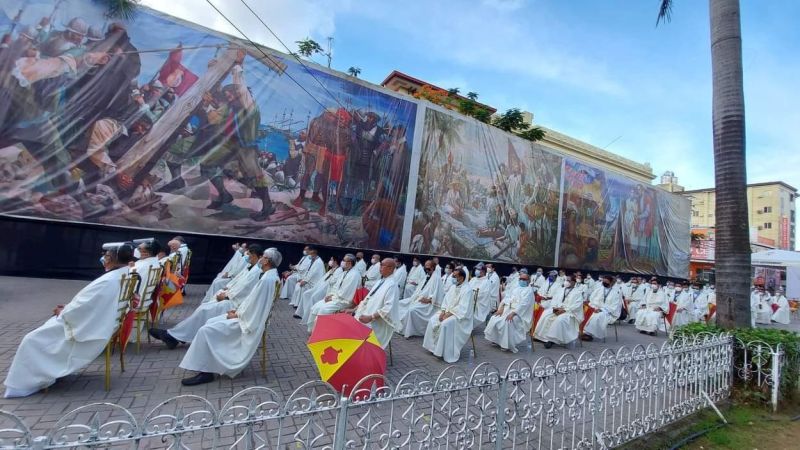 SPIRITUAL LISTENERS. Members of the clergy listen to the homily of Papal Nuncio to the Philippines Archbishop Charles Brown during the pontifical mass for the quincentennial commemoration of the first baptism in Cebu City on Wednesday, April 14, 2021. / AMPER CAMPAÑA

THE roots of the Christianity, specifically the Roman Catholic faith, in the Philippines have links to European imperialism in the 16th century, and the faith practiced by the majority of modern Filipinos can never shed its colonial past.

The first baptism in the archipelago—the conversion of Rajah Humabon and his men to Christianity—on April 14, 1521 was just the beginning of the saga of the faith that was instrumental in the Spanish Empire’s conquest of the archipelago.

Jesuit historian John N. Schumacher, in his book, “The Propaganda Movement, 1880-1895,” wrote: “If in all of Spain’s empire the church was the most important institutional element, such a situation was most notably true in the Philippines. Nowhere else was a native people Christianized so rapidly, and nowhere else did the missionaries lead so conspicuously in fashioning the culture of an indigenous population.

“The pomp and pageantry of Spanish Catholicism had been transported to the Philippines, where its role in the life of the people was accentuated even more. The relative scarcity of priests, particularly in the rural regions where people lived scattered over wide areas, increased this tendency to center religious life on the fiestas, processions, and other external practices. Apparently, relatively little was done to impart systematic religious instruction, especially in the later eighteenth and early nineteenth century. The acute shortage of friars at this time, the generally low intellectual level of the Spanish clergy as a whole during this period, and the wretched training given to the Filipino secular clergy no doubt helped to accentuate the externals of Catholicism.”

However, as the Catholic faith in the country travelled through centuries, it has undergone transformations—at one point, it became the refuge of the oppressed and a beacon for freedom when the entire nation was in the throes of an authoritarian regime.

Without hearing the voice of a Manila cardinal on Radio Veritas on Feb. 22, 1986, perhaps, there would have been no People Power Revolution, which led to the peaceful overthrow of a dictatorship and the restoration of democratic institutions.

The Roman Catholic faith today and tomorrow still has roles to play for the common good in the society.

And to celebrate Christianity’s 500-year existence in the country one must learn from the past today and learn from it again in the future. The sun in the Spanish Empire had already set, and it would never rise again. But one of its footprints in the country, the Roman Catholic faith, is an empire itself—occupying the faithful’s hearts and minds, and spiritual identity.