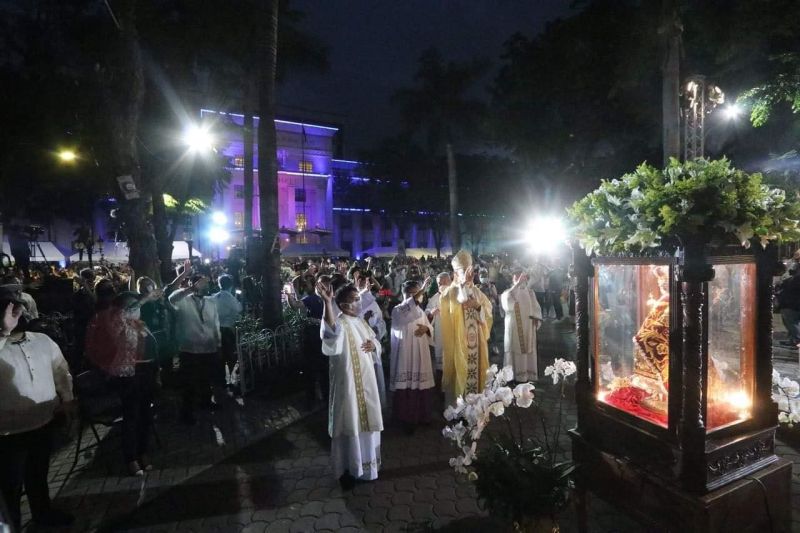 Under the National Cultural Heritage Act of 2009, or Republic Act 10066, a national cultural treasure refers to a unique cultural property that possesses “outstanding historical, cultural, artistic and/or scientific value which is highly significant and important to the country and nation.”

The same law provides that national cultural treasures are entitled to receive the following: priority government funding for protection, conservation and restoration; incentive for private support of conservation and restoration; an official heritage marker; and priority protection by the government in times of armed conflict, natural disasters and other exceptional events.

This is the fourth marker installed within the Basilica.

The declaration, which was made by the National Museum of the Philippines through Museum Declaration No. 55-2020, was part of the commemoration of the 500th Year of Christianity (YOC) in the Philippines.

During the pontifical mass to mark the first baptism 500 years ago, seven children were chosen to be baptized as Catholics.

Archbishop Charles Brown, Papal Nuncio to the Philippines, led the sacrament of baptism that welcomed the children to the Catholic community.

“We will give rebirth, in the spirit, to these seven wonderful children by means of baptism. We will give them the light of Christ,” Brown said.

Milby, 13, is a member of an indigenous community in Iloilo. His guardian, Rosemarie Elosendo, said they agreed to have Milby baptized.

Noel Fabrua, father of 10-year-old David Villagracia, said he was happy that his son participated in the historical event.

“Happy. We did not have the money to have him baptized earlier,” he told SunStar Cebu.

Each of the newly baptized children received a blessed image of the Sto. Niño de Cebu, just as Portuguese explorer Ferdinand Magellan gifted Hara Humamay, wife of the then Cebu chieftain Rajah Humabon, with an image of the Holy Child.

In his homily, Brown emphasized that as the Cebuano Catholics may reflect on what happened in Cebu five centuries ago, they are “confronted with a paradox” that Christianity is a faith that began in Asia and then spread throughout the world into large parts of Asia, North Africa, and Europe.

“So, we have this paradox of the arrival of Christian faith in the Philippines — that the faith, which itself, was born in Asia, was then brought here first by means of European explorers and colonizers who were accompanied by missionaries and that was a great gift — the gift of Catholic faith,” he said.

Brown noted that what is “beautiful about Philippine Catholicism” and what it celebrates this time, “with hearts filled with joy,” is the fact that in five centuries, the Catholic faith has entered “deeply into the Filipino culture and has produced a distinctively Filipino expression of the unchanging and universal truth of Catholic faith.”

“The tender love of the Sto. Niño is the symbol of the arrival of Christianity in your archipelago,” the Papal Nuncio said.

The 500 YOC theme song was played while the jubilee cross and the image of the Sto. Niño were paraded.

These two icons were also displayed during the motorcade held in the last three days, or the triduum for the 500 YOC, in the cities of Cebu, Talisay, Lapu-Lapu and Mandaue as well as in Cordova town.

Palma, who also concelebrated the mass along with Cebu Auxiliary Bishop Midyphil Billones and other bishops, expressed gratitude to the faithful for bearing witness to the historical event despite the drizzle.

He thanked President Rodrigo Duterte for declaring April 14 as a special non-working holiday in Cebu City to give way for the celebration.

The San Diego Dance Troupe, which earlier offered a dance drama reenacting the first baptism in the country, also offered a brief Sinulog presentation after the mass.

Only 700 individuals, instead of 800 to represent the estimated number of natives who were baptized 500 years ago, were allowed to attend the mass and the other events to ensure physical distancing.

Among the archbishops who confirmed attendance were Cardinal Orlando Quevedo, Archbishop John Du, Bishop Patrick Daniel Parcon (Talibon), Bishop Precioso Cantillas of the Archdiocese of Maasin, and Monsignor Bernardo Pantin, secretary general of the Catholic Bishops’ Conference of the Philippines.

A total of 300 public officials and parish representatives of the Archdiocese of Cebu were invited. The rest were servers, volunteers, members of the choir, media and church staff.