Gasataya asks DPWH to explain cutting of trees in Singcang-Airport 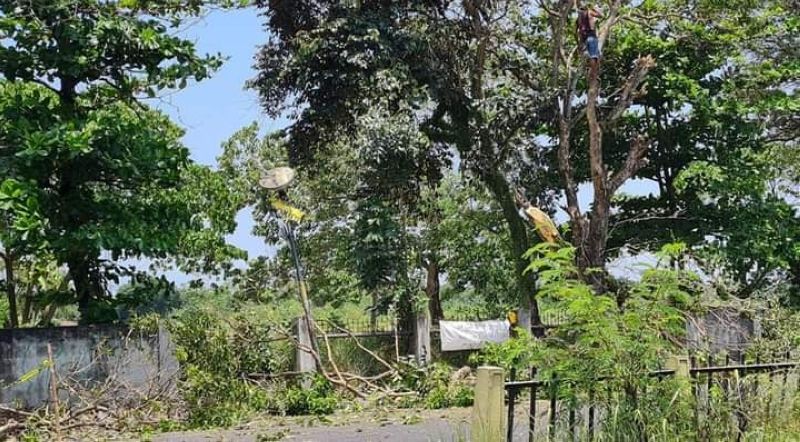 BACOLOD. Netizens react on social media to the cutting down of the 26 fully grown mahogany, acacia and rubber trees along Bacolod-Kabankalan highway as part of a sidewalk improvement project yesterday. (Contributed photo)

BACOLOD City Lone District Representative Greg Gasataya has requested the Department of Public Works and Highways (DPWH)-Bacolod to submit an explanation on the cutting of 26 fully grown trees along Bacolod-Kabankalan highway in Barangay Singcang-Airport, Bacolod City.

In his letter dated April 13 and addressed to District Engineer Jaime Javellana, Gasataya said it has been brought to his attention that trees were cut along the Bacolod-Kabankalan highway, allegedly part of a sidewalk improvement project.

He said he appreciates the commitment of the District Engineering Office to infrastructure development, but there should be exertions to ensure that infrastructure projects are sustainable and should maintain a balance between development and preservation of nature.

Gasataya said as much as possible, trees and objects as such should be spared.

“In this light, this representation requests an investigation on the cutting of the trees along the area, an explanation as to why such a course of action was undertaken and to ensure that the remaining trees in the vicinity remain unharmed,” Gasataya said.

The lawmaker also urged Javellana to conduct proper consultation with local officials and stakeholders to guarantee sustainability in cases of natural obstructions in implementation sites.

Some netizens also reacted on social media on Tuesday, April 13, 2021, to the cutting down of the 26 fully grown mahogany, acacia and rubber trees in the said area.

“We need to cut the trees in said area because it is very important for the safety of our pedestrians and commuters,” he said.

He added the trees’ roots already damaged the sidewalk and pose danger to pedestrians, commuters and motorists. The roots also affected the drainage system in the area.

Javellana said they have ongoing projects for the improvement of the sidewalk and installation of streetlights from the Bacolod public plaza towards the Old-Bacolod Airport with a total budget of P32 million.

“We have a remaining of nine trees in said area, but we will not cut it because I received a call from Congressman Gasataya and from the DPWH regional director to stop the cutting of trees,” Javellana said.

He said based on their approved permit, they have a total of 35 trees to be cut down, but they already cut down 26 trees.

Mayor Evelio Leonardia also said it was reported to him that the big old trees along the highway at the Old Bacolod-Airport were cut.

“That is unacceptable,” he said.

Leonardia also directed the Bacolod City Police Office (BCPO) to inspect the area and to stop the cutting of trees.

“I was told people are shocked that these Bacolod treasures had been ravaged. We’ve lived with these trees for decades now,” the mayor said.