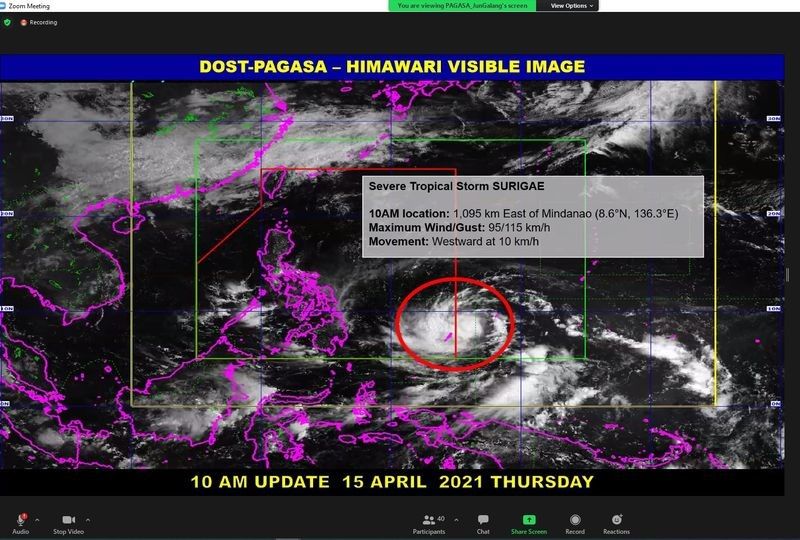 A SEVERE tropical storm with international name Surigae may enter the Philippine area of responsibility as Typhoon Bising Thursday night or Friday morning, but the state weather bureau said there’s a low chance that it will make a landfall.

As of 10 a.m. Thursday, the severe tropical storm was estimated at 1,095 kilometers east of Mindanao with maximum sustained winds of 95 kilometers per hour (kph) near the center and gustiness of up to 115 kph.

It was moving westward at 10 kph, the NDRRMC said, quoting the Philippine Atmospheric, Geophysical and Astronomical Services Administration (Pagasa).

The weather bureau said the storm remains less likely to affect the country, and has a low chance to landfall.”

However, Pagasa said a westward shift is possible in the current forecast track and the storm may significantly impact the eastern portion of Sourthern Luzon and Visayas over the weekend until Monday, April 19.

Moderate to heavy rains may be experienced over the eastern portions of Visayas by Sunday, April 18.

Pagasa also said a gale warning may be raised over the southern portion of Luzon, and the northern and eastern portions of Eastern Visayas by 5 a.m on Saturday, April 17. (SunStar Philippines from PR)