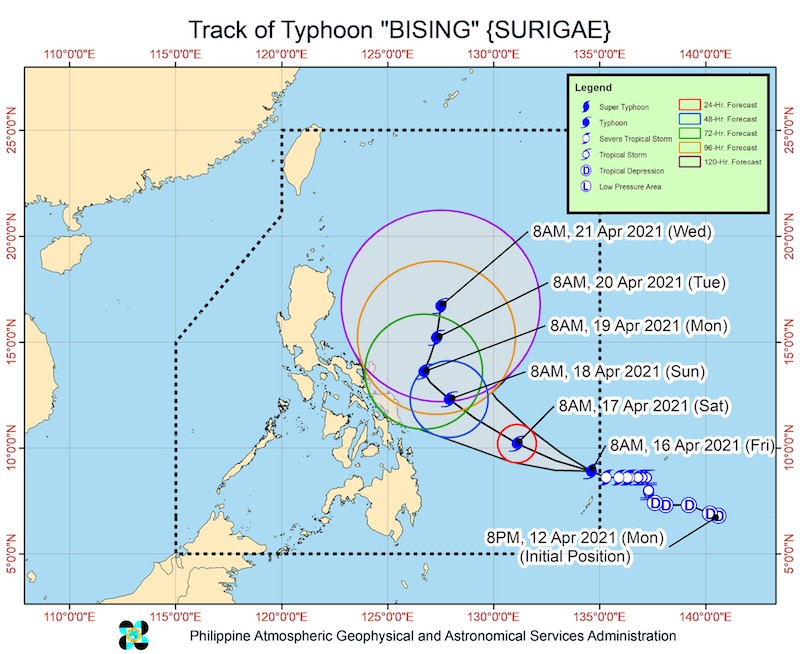 It is currently not directly causing severe weather over any portion of the country, but Northern Samar and Eastern Samar are likely to be placed under Tropical Cyclone Wind Signal no. 1 Friday evening, state weather bureau Philippine Atmospheric Geophysical and Astronomical Services Administration (Pagasa) said.

At 10 a.m. Friday, the eye of Typhoon Bising was located at 960 kilometers east of Surigao City, Surigao del Norte.

It was packing winds of up to 130 kilometers per hour (kph) and gustiness of up to 160 kph.

In the next 24 hours, the typhoon will bring rough to very rough seas (2.8 to 4.5 meters) over the eastern seaboards of Visayas and Mindanao.

Mariners of small seacraft are advised to take precautionary measures when venturing out to sea.

The typhoon is forecast to begin affecting portions of Eastern Visayas and Bicol Region on Sunday, April 18, but there’s a low probability of the typhoon hitting land in any part of the country.

Pagasa said it is forecast to intensify over the next three days as it moves generally west-northwestward. (Marites Villamor-Ilano / SunStar Philippines)