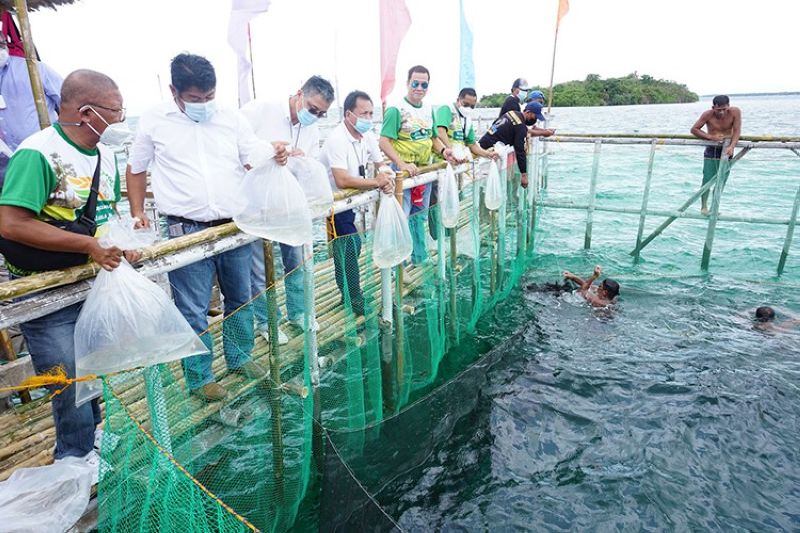 THE Municipality of Bantayan in Cebu has reaped a total of P35.7 million worth of agri-fishery projects that will leapfrog the town’s food security program to boost the Province of Cebu’s tourism campaign for the island.

Of the 35.7 million, P4.7 million worth of projects were turned over by the Department of Agriculture on Thursday, April 15, 2021, and broke ground the P30 million multi-species hatchery.

The projects that were turned over to the town were the 11 units for fiberglass reinforced plastic boats with .65 horsepower marine engine and underwater fittings worth 501,069; P2.6 million worth of corn crops insurance for 528 farmers, P215,326 corn crops insurance of 91 farmers; P1 million worth of 200 bags of hybrid yellow corn seeds, and P360,000 worth of urea fertilizers.

The hatchery will boost the seafood production of Bantayan’s fish and crabs supply, Poquita said.

The governor said that when the pandemic hit Cebu in 2020 she realized the difficulty of having not enough food and looking for it in other provinces because Cebu’s food production was not enough.

The governor earlier launched the Sugbusog program, which is aimed at providing a sustainable food supply for every household.

Meanwhile, Bantayan Mayor Arthur Despi said the town of Bantayan is proposing a P168 million worth of agri-fishery projects to leapfrog the food production of the town and restore the town’s abundance of seafood resources.

These projects, Despi said, are aligned with Garcia’s Sugbusog program.

Despi said of the P168 million, P30 million which is the multi-species hatchery is already on the pipeline.

Pending the approval of the proposal, Despi said they have made the social preparation by approving the town’s municipal water ordinance.

The ordinance identifies the town’s navigational lane, the marine protected areas as well as the multi-purpose lane.

The mayor said Bantayan town may not have the wide white sand shoreline of Sta. Fe, but it will be the island food supplier with the proposed agri-fishery projects. (MVG)