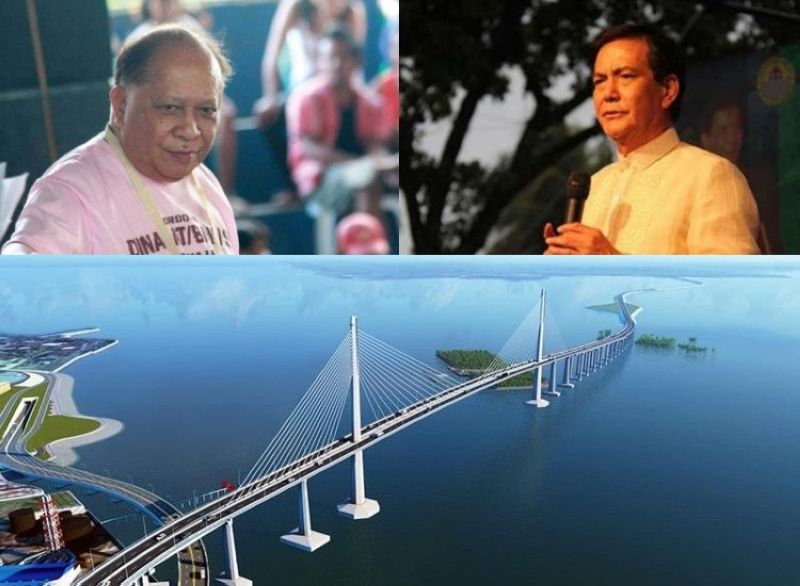 [1] ROLE IN ‘CEBU 500’ FETE. The Cebu-Cordova Expressway (CCLEX), or Cebu-Cordova Bridge, the third bridge linking Mactan Island with mainland Cebu, literally shone during the commemoration of the 500th anniversary of Christianity in the Philippines last Wednesday, April 15.

Eight crosses placed on top of the bridge twin pylons lit up as fireworks exploded. The bridge, Archbishop Jose Palma said at the rites, is an example of “collaboration, connectivity and community.”

Earlier, on March 20, the Spanish navy training ship Juan Sebastian Elcano docked at the Cebu City port, against the backdrop of the CCLEX bridge, also as part of the quincentenary activities. The image symbolized, SunStar Top of the Week noted, Cebu “celebrating the past and embracing the future.”

[2] TARGET DATE FOR OPENING. Last mid-February, CCLEX said the project was on track, with 68.21 percent of the work done, and will be “substantially completed in December this year.”

Saturday, April 18, Jasmin Ginete, the firm’s communication manager, told SunStar there’s no specific opening date yet but “target is within the first quarter of 2022.”

[3] BRIDGE TOLL. Metro Cebu Pacific Tollways Corp, project proponent and subsidiary of Metro Pacific Investment Corp., announced last January 24, 2020 fees from P85 to P300 to cross the bridge: P85 for Class 1 vehicles, P160 for Class 2 vehicles and P300 for Class 3. Standard of classification, depending on number of axles and height, is set by the Department of Transportation’s Toll Regulatory Board.

[4] WHAT LGUs WILL GET. Cebu City Vice Mayor Mike Rama, interviewed by Elias Baquero on dyRC radio Friday, April 17, said he wasn’t sure how much would be the share of the two LGUs from the bridge toll. Ginete told SunStar each local government will get one percent of “gross toll revenues.”

The agreement with the LGUs covers 35 years, after which ownership of the bridge would go to Cebu City and Cordova, which would then decide to keep or remove the fees. The first bridge collected toll but during the campaign for the February 7, 1986 snap election, then president Ferdinand Marcos Sr. decided to abolish the bridge fees. No toll was ever collected at the second bridge, the Marcelo Fernan Bridge.

Also considered in the CCLEX deal are economic benefits expected from an additional link to and from Mactan island, reduced traffic congestion, and creation of more jobs.

[5] IT’S CCLEX FOR FOR NOW. Already, names have been proposed for the third bridge, including Sto. Nino Bridge, from deeply religious Cebnanos, and Adelino Sitoy Bridge, from admirers of the former Cordova mayor and the president’s legislative liaison who died last April 15.

Who can name the bridge? Sergio Osmena Bridge, the first bridge, was named by the Mactan-Cebu Bridge Management Board only in 2013, or 41 years after it opened. Previously, it was called the First Bridge or Old Bridge. The Marcelo Fernan Bridge was named by an act of Congress shortly after it opened in 1999; the former Supreme Court chief justice and Senate president whom the bridge honors, died on July 11 of the same year.

[6] WHAT BODY WILL MANAGE BRIDGE. Ginete said the concession agreement with Cebu City and Cordova, the two LGU grantors, provides for a CCLEX Bridge Management Board.

Interesting point: Then-president Joseph Estrada’s Executive Order No. 181 of December 9, 1999, establishing the Mactan-Cebu BMB, refers in its first “Whereas” to the “existing and proposed bridges connecting mainland Cebu and Mactan islands,” and in its Section 1 to “development, use and management of the said bridges.”

The difference though is that the first two bridges were national projects while the third bridge is a joint venture between a private company and two LGUs, both of which have ordinances governing joint ventures with private parners. Mayor Sitoy at the time said CCLEX project didn’t need the approval of President Duterte. Still, Duterte attended the groundbreaking rites on March 2, 2017.

[7] PUBLIC OFFICIALS TO CREDIT. In one published account, Adelino Sitoy is credited for “conceiving/conceptualizing” since 2014 the bridge connecting his town of Cordova to Cebu City. On the Cordova side, besides Addy Sitoy, credit is also due to Mayor Mary Therese Sitoy-Cho, who led the town in its role as co-partner to the project, guided by then-presidential assistant Sitoy, her father.

The project, the same source said, was “lobbied” by then Regional Development Council chairman Mike Rama, who was the city mayor (2013-2016) when the project was still developing. But the grant to Metro Pacific was signed by then vice mayor Edgardo Labella who was acting mayor because at the time Rama was suspended by Malacanang. Labella has also been seeing the project through, including the recent grant of usufruct over city-owned lot needed by CCLEX for the city end at the mouth of Guadalupe River.

In the March 2017 groundbreaking, Tomas Osmena was already back as city mayor after his party dominated the 2016 election. The project has thus spanned two administrations, with Barug at the beginning and end and BOPK in the middle.