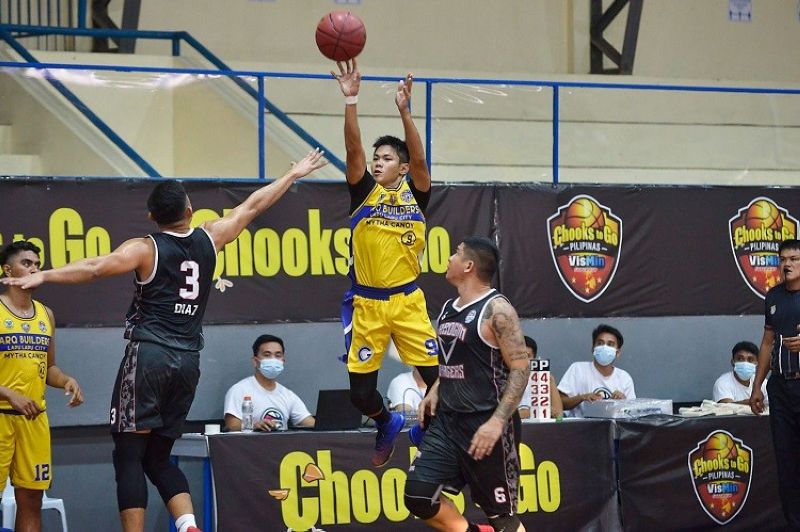 ALCANTARA. ARQ Builders guard Jerick Cañada said he’s proud of his teammates and coaches for what they showed during the game versus the powerhouse Talisay. (Chooks-to-Go)

ARQ Builders Lapu-Lapu City Heroes guard Jerick Cañada said he couldn’t be any prouder of his teammates for the grit and toughness that they showed against the undefeated MJAS Zenith-Talisay City Aquastars in the Chooks-to-Go Pilipinas VisMin Super Cup on Saturday, April 17, 2021.

Despite missing five key players and their head coach as a result of the fallout stemming from their controversial game against the Siquijor Mystics earlier this week, ARQ was still able to do what no team has been able to do so far in this tournament—hang with powerhouse Aquastars.

For most of the game, ARQ went toe-to-toe with MJAS and even took a 67-64 lead with just six minutes left in the game. However, Talisay City found their second wind and knocked out Lapu-Lapu City with a 16-2 run that led to their 84-75 win.

Cañada was at his very best in the game as he almost had a triple-double with 10 points, an eye-popping 15 assists and eight rebounds. In a talk with SunStar Cebu, Cañada said he spoke to his teammates before the game and encouraged them to give it all they had, for their families, their fallen teammates and for the team owner, Jason Arquisola.

“Ako giingon nila nga this game is for our family as well as to our boss Jason and his family, to our coaches and to Rendell, our other teammates nga na affected sa suspension,” said the veteran court general. “I told them to give and show everyone everything we’ve got, that we are here to win, to the best and noblest way that we know of.”

Down to just 10 men, each player saw court time and contributed in different ways. Homegrown talent Chris Regero played for the first time in this tournament and scored 12 points, grabbed four boards and blocked two shots. Undersized forward Fletcher Galvez banged bodies with Talisay’s humongous frontline and came away with 12 boards. Vincent Minguito did incredible work on both ends of the floor, and scored 13 points and swatted away five shots.

“Na-inspire mi sa amo boss, coaches and teammates nga wala nakaduwa because we know that they too would do the same thing. We share the same love and passion for basketball. We share the same goals and aspiration and that is to win the game just like everyone else,” shared Cañada.

In fact, Cañada said they weren’t there to just compete against the heavily-favored Aquastars. They were there to get the win against the unbeaten squad.

“Proud kaayo ko sa ako teamates and coaches sa pagduwa namo kay gipakita nila ila capabilities throughout the game,” said Cañada. “We were there to play the game, to show everyone what we have for us to win and that we respect the league.”