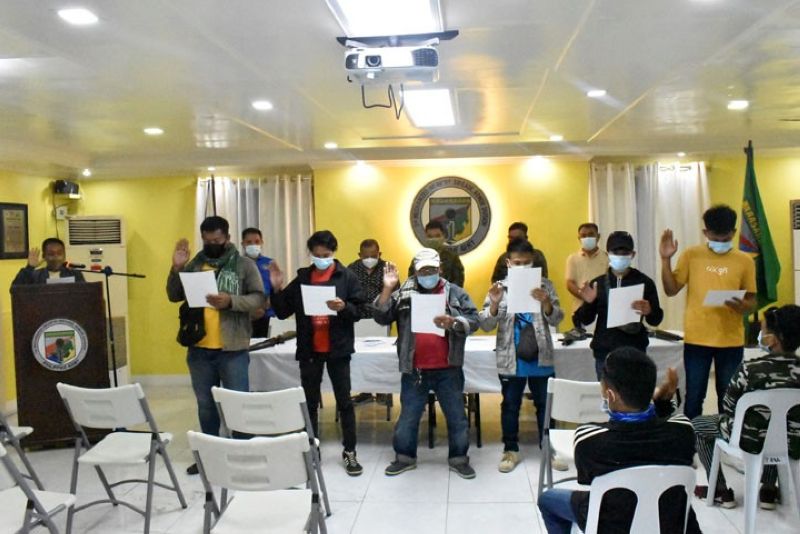 ZAMBOANGA. A division commander of the Bangsamoro Islamic Freedom Fighters, Abunawas Ibad Damiog alias Bayawak and five of his followers surrender on Saturday, April 17, to military authorities in Ampatuan, Maguindanao. A photo handout shows Damiog (1st from left, front row) and his followers taking an oath of allegiance in a ceremony at the headquarters of the 1st Mechanized Infantry Brigade in Ampatuan, Maguindanao. (SunStar Zamboanga)

A DIVISION commander of the Bangsamoro Islamic Freedom Fighters (BIFF) division and five of his followers surrendered to the military authorities in Maguindanao, military officials announced Sunday, April 17, 2021.

He said Damiog disclosed during the debriefing that he wants to live a peaceful life with his family and he got tired of following the orders of top leaders without getting anything in return.

“May the surrender of Damiog be an eye-opener to his followers,” said Major General Juvymax Uy, commander of the Joint Task Force Central.

“Rest assured that we will help them to go back to their normal lives by providing them with livelihood opportunities,” Uy added.

Since January, a total of 42 BIFF members have surrendered to the Joint Task Force Central. (SunStar Zamboanga)