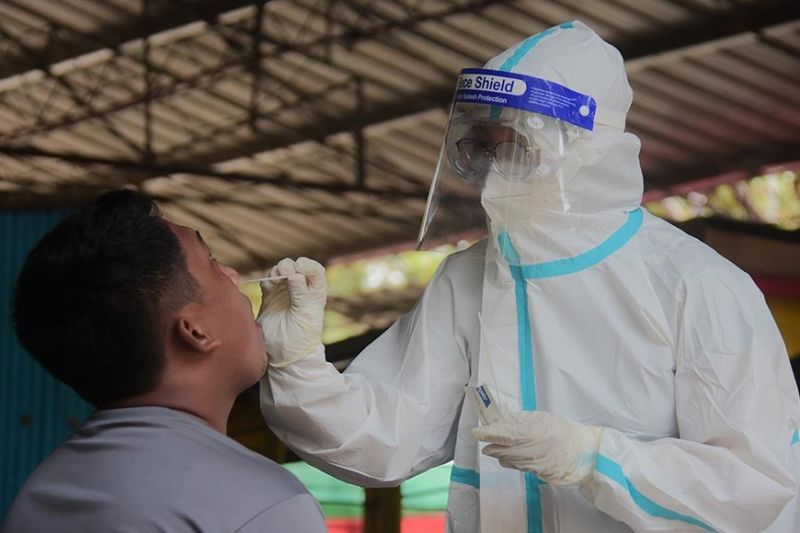 SWAB. Davao City is conducting a series of targeted swabbing to detect Covid-19 patients in the city. Of the 3,000 that were swabbed initially, around three percent tested positive for Sars-CoV-2. Most of those who were positive are asymptomatic or with mild symptoms. (Mark Perandos photo)

(Editor’s note: This is a two-part series on the Covid-19 situation in Davao City and what the local government unit is doing to manage it. Read the first part, Covid-19 in Davao City: A year after https://www.sunstar.com.ph/article/1891375/Davao/Feature/Covid-19-in-Davao-City-A-year-after-(Part-1))

AT THE start of 2021, there was a silver lining with the arrival of the Covid-19 vaccines.

Davao City and other neighboring provinces in Davao Region have started the vaccine rollout beginning the first week of March, more than a week since the first batch of vaccines from Sinovac arrived in the country.

Based on the vaccine statistics of the National Task Force Against Covid-19 (NTF) as of April 13, Davao Region has received a total of 103,600 doses from the national government as of April 7.

Despite the increasing number of workers wanting to be vaccinated, according to the national government, supply remains scarce as manufacturers are also having problems in production.

The Centers for Disease Control and Prevention said early data suggesting fully-vaccinated people are less likely to spread Covid-19 looks promising, but "we're still learning how well Covid-19 vaccines keep people from spreading the disease" as well as "how effective the vaccines are against variants of the virus."

Given this continued risk, medical experts deemed it is important that the government remains focused on other Covid-19 management strategies like testing.

Testing has been a crucial part of the Covid-19 response in Davao City, especially during the early days of the pandemic, Davao City Health Office (CHO) Acting Head Dr. Ashley Lopez said in a Facebook live interview with SunStar Davao's The Talking Heads on April 9.

"With or without the vaccine, ever since the beginning, the mayor is not dependent on the vaccine because the vaccine will not totally protect the person or the community against Covid-19," Lopez said, explaining that it will only make the virus less severe, but the risk of infection is still possible.

With a population of around 1.8 million, the city has targeted to vaccinate some 1.2 million residents to achieve herd immunity. But with the scarce supply of vaccines, this will not be achieved anytime soon.

"How can we be assured na mabakunahan ang (that we would be able to vaccinate those) 70-percent? We will not wait for that to happen. If we won't do anything, mudaghan gihapon ning kaso sa Covid[-19] sa Davao City (Covid-19 cases in Davao City will continue to increase)," Lopez said.

While it is a relief that the Covid-19 cases in Davao City have steadily dropped in the past several weeks, Lopez said it is not something worth celebrating for now.

In fact, he said the health cluster is still not convinced that Covid-19 cases are now manageable. This despite the city being classified by the IATF as a "low-risk city" due to the slow growth rate of cases.

To validate the data and the situation on the ground, he said, the local government is on a "manhunt" to look for and prevent the clustering of cases within households, communities, and even in establishments.

Davao City Mayor Sara Z. Duterte-Carpio signed Executive Order No. 18, series of 2021 (EO 18) for the heightened surveillance and response of Covid-19 in Davao City. The EO allows the local government unit to expand its testing and contact tracing capabilities to manage the Covid-19 situation in the city.

Under the EO, the city will test and monitor those with influenza-like illness (ILI), which is defined by the World Health Organization as an acute respiratory infection with a measured fever of more than or equal to 38 degrees Celsius, cough, and with onset within the last 10 days.

The city government piloted its surveillance swabbing in some establishments in the Uyanguren street area and the Calinan and Agdao Public markets.

Three percent out of the 468 individuals swabbed during the city’s surveillance swabbing in markets and selected establishments on Wednesday, April 7, tested positive for Sars-CoV-2, which causes Covid-19.

Duterte-Carpio explained in a recent interview that the city started its community surveillance as wet markets are commonly known as high-risk areas when it comes to Covid-19 transmission.

The city is currently expanding its community testing, this time, sidewalk vendors covering the downtown area.

Expect that it will also be expanded to the community level, Lopez said.

Aside from the heightened community swabbing, the city also expanded the mandatory swab testing of all close contacts, including the second and third-generation contacts of confirmed Covid-19 patients.

"There is a need to recalibrate strategies to prevent and control Covid-19 transmission in the city due to the surge in cases in Metro Manila and other areas in the country and the emergence of new Covid-19 variants, despite the city continuing to experience a downtrend of cases," Duterte-Carpio said in the EO.

With the expanded testing, the city is targeting to conduct 1,000 tests per day to know and determine the pattern and gravity of the Covid-19 transmission in the city.

"Expect gyud ta daghan ta'g ma-swab, daghan ta'g ma-test (The more people we swab, we will be able to test more) and the target is about at least 1,000 tests per day. So kung daghan tang ma-test, daghan tag ma-detect na mga (when we get to do more tests, we would be able to detect more) positive [patients]," Lopez said.

Since the City Government intensified its heightened surveillance and expanded its testing of all generation close contacts, the health official saw an increase in active Covid-19 cases in recent days.

“But the turnout of the surveillance swabbing we are having right now, is indeed, tinuod or nag-prove sa atoa nga ang atong kaso against Covid-19 (validated or proved that Covid-19 cases) in Davao City is slowing down,” the official said.

The city's daily positivity rate, based on the recent DOH data, is currently at an average of five percent, which according to the World Health Organization's set threshold is considered manageable.

"The ultimate goal for this massive testing, and intensified surveillance is to zero in Covid cases in Davao," he said.

Lopez said eyes to do more in terms of Covid-19 response so that it could gradually reopen the economy.

With the delays in the arrival of vaccines and the threat of the new Sars-CoV-2 variants, we are not out of the woods yet.

The city’s expanded targeted testing is just among the strategies the city is implementing to prevent the second wave of Covid-19 cases.

On top of this strategy, continued implementation of some movement restrictions plays a crucial role in managing the spread of Covid-19.

To prevent people from gathering, several restrictions were extended like the 24-hour liquor ban, 9 p.m. to 4 a.m. curfew, the mandatory alternative work arrangement for public and private offices and establishments, and non-essential establishments remaining.

Residents of Davao City must also continue to follow minimum health protocols like wearing facemasks and observing social distancing. It is also important for them to cooperate in the Covid-19 testing and contact tracing efforts of the city and health authorities.

There is a long way to go to bring down new cases to single digits or to zero. However, the efforts the city is implementing whether it is in contact tracing or testing will allow it to manage the Covid-19 pandemic properly while it waits for the arrival of more vaccines and vaccinated more Dabawenyos.