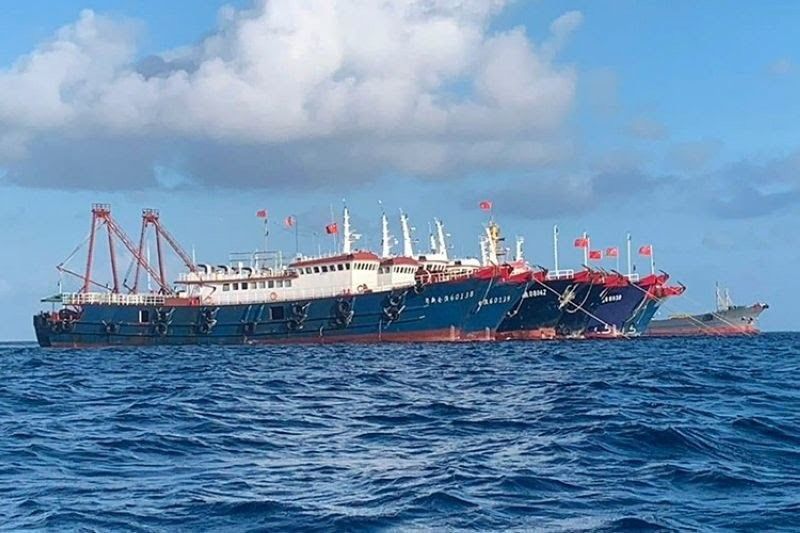 Its secretary general Wennie Sancho, in a statement, said this "audacious intrusion" of the Chinese fleet into the exclusive economic zone in the West Philippine Sea is an assault on the country's democratic and republican principles of governance.

Sancho said what is truly serious is the political weakness of a government that does not react to the incredible succession of events in the West Philippine Sea, as it wavers between passive indignation and mere indifference.

"The state is mandated to protect the nation's marine wealth in its archipelagic waters, territorial sea and exclusive economic zone as provided for in the 1987 Philippine Constitution," he said, adding that "we look up to the government for the protection of our nation's patrimony, but it was missing."

For the labor leader, these "terrible events" resulted in a broad loss of confidence in the national leadership, a sense of discontent and a serious reason for concern about the future course of our sovereignty as a people and as a nation.

Sancho, also the labor representative to the Regional Tripartite Wages and Productivity Board (RTWPB)-Western Visayas, said most of the people have been incapacitated because they do not speak up or afraid to speak up.

He said modern methods of persuasion have created a new hierarchy of influence over government decisions.

"A new way in which organized money dominates the action, while the unorganized voice of the people are inhibited from speaking," Sancho said.

The Gawa official further said nowadays, democratic expressions have become much more expensive and even dangerous.

"We are alarmed by the presence of Chinese ships like an armada. We have filed a series of diplomatic protests but the Chinese ships do not move away, they're here to stay despite the fact that they are excluded from exercising dominion or jurisdiction without the consent of the Philippine government," Sancho said.

He asserted that "our national waters are being occupied by a flotilla of Chinese ships like an army set in a battle array?"

This alarming situation brought the questions that had been long forgotten, the group said.

"Where were courage and determination? And having started to ask, then the other questions came, and truth, justice and even democracy," it said.

Citing the statement of the late Senator Benigno "Ninoy" Aquino III that the Filipino is worth dying for, its official said "if the man thought that we, in our weakness were worth dying for, perhaps we could make ourselves even more worthy by having a bit more of his courage, his vision and his determination."

Sancho asked, "why is it that there seems to be a deafening silence all over the land when the Chinese intruders 'trampled our sacred shores?'"

"Has the Filipino become a coward who readily yields our territory and patrimony to the Chinese horde?" he asked.

Moreover, Gawa expressed frustration on the "exodus of Chinese workers" which for them had stolen the Filipinos right to work and our jobs.

"They had stolen our territories. They had taken away our pride and dignity," the labor group said.

"Let us never allow them to muffle our voices of protest, we shall shout strong and loud as a manifestation of indignation against the transgression of our sacred rights as Filipinos," it said, adding that "we shall protest."