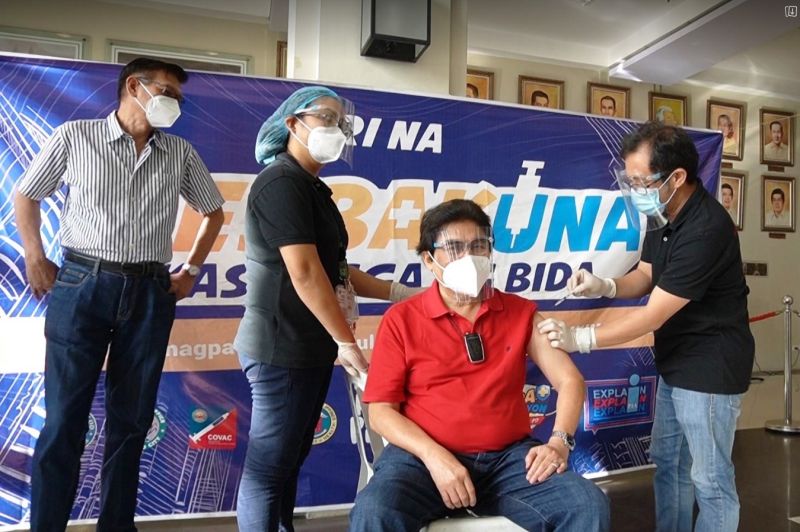 BACOLOD City Mayor Evelio Leonardia was inoculated with the AstraZeneca vaccine against coronavirus disease (Covid-19) at the Bacolod Government Center in the city on Saturday, April 17, 2021.

The national Covid-19 vaccination operations center earlier issued Advisory No. 26 dated April 5, 2021, on the vaccination of the local chief executives (LCEs) in critical and high-risk provinces, cities and municipalities.

The advisory said if a locality becomes high or critical risk as determined by the Department of Health (DOH), the LCEs of the said locality shall be qualified for inoculation with Covid-19 vaccines.

Based on the list, Bacolod City is one of the highly urbanized cities (HUCs) considered as critical and high-risk areas.

On March 31, Leonardia, a national president of the League of Cities of the Philippines (LCP), also sent a letter to President Rodrigo Duterte appealing for the reclassification and inclusion of the LCEs as frontline workers to be included in the priority group A1 because it is a win-win strategy.

Leonardia said cities have been epicenters of the pandemic and city mayors have been diligently working to ensure that protocols are being implemented.

He said they will continue to follow the availability of the vaccine depending on the local government units.

The mayor also admitted that based on some information, if he is given a choice, he can entertain other brands of the Covid-19 vaccines, but he chose AstraZeneca because this is a very highly reliable brand.

He said the city government already signed a deal with Oxford-British firm for 650,000 AstraZeneca doses of vaccine. This will inoculate about 355 individuals in the city.

“If this is the vaccine for our people so this would also be my vaccine,” he added.

After his vaccination, the mayor said he is hopeful that he can encourage Bacolodnons to avail of the Covid-19 vaccine.