Editorial: ‘Not charity, but mutual aid’ 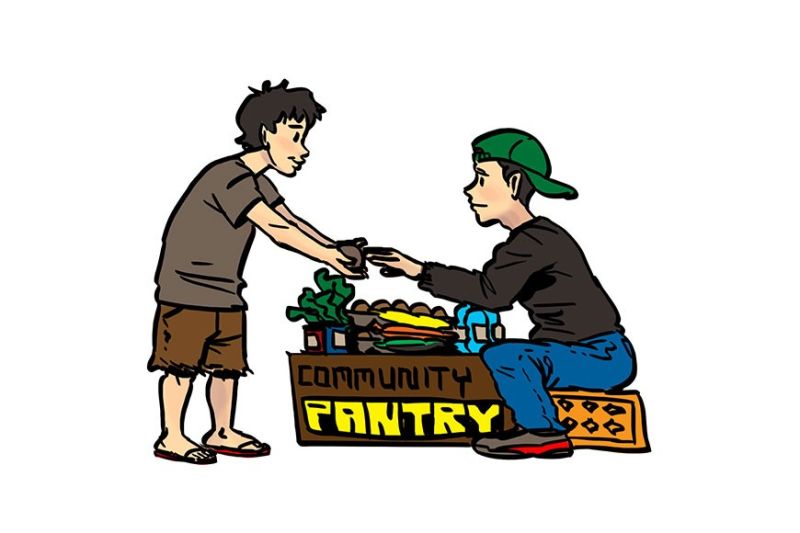 These community pantry initiatives, sprouting in many places all at once, are likely to place sectors in government in an awkward position. They have been sold along the idea that they’ve been born out of frustration over government shortcomings in this pandemic.

These communities are not to be blamed. At the launch of the new lockdown at the National Capital Region and surrounding provinces after the infection surge, the National Government only earmarked P1,000 per individual or a maximum of P4,000 per family assistance to local government units.

“The P4,000 per family... that will never be enough, but the nature of ayuda is to help (the family) pass this period na hindi makakapagtrabaho. ‘Yun na po ‘yun,” Malacañang spokesperson Harry Roque Jr. said it with finality. That amount would be it—short of saying, whether you like or not, whether that suffices or not, take it or leave it.

But ground realities are rather grim. Citizens still reel from the effects of the long lockdown, and even if the economy starts to open up, they are hardly out of the financial trauma—unemployment lingers, prices of basic commodities are at staggering hikes, and the debt burden hangs like iron balls stuck on their necks. So whether one is a staunch fan of this government or not, survival for the many is a daily, weekly thing.

This was what Ana Patricia Non, a young entrepreneur on Maginhawa St., Teachers Village, Quezon City, saw in her corner of the world. At the early part of the ECQ, she worried about the poor jeepney drivers and vendors whose livelihood would be severely hit. She set up a community pantry and people—both those in need and those who could give—came. The stall message was clear: “Magbigay ayon sa kakayahan, kumuha batay sa pangangailangan,” from the famous slogan, “From each according to his ability, to each according to his needs.” In less than a week, the Maginhawa Community Pantry had served 3,000 individuals, and most remarkable of all was that farmers from far-flung areas of Luzon came to donate some of their harvest at a generous volume. Most of the donations, in fact, did not come from rich households, which makes the idea of the community pantry even more a radical idea.

This is reminiscent of the Food Not Bombs initiative, the anti-war resistance movement that was founded by anti-nuclear activists in the 1980s. A loose group of independents sharing vegan and vegetarian food, a counter-statement to large government and corporate spending on warfare. The program evolved through the years in various historical context, but the idea of resistance was at the core of it.

This isn’t to say that the community pantries, probably now at the tipping point of replicating exponentially in various parts of the country, share the same audacity as the Food Not Bombs initiative, although it is still bold in its own terms. The Filipino version keeps its heart by attributing it to the Bayanihan spirit. But the fact that the current state of mind reflects a persistent desperation at how government has repeatedly shortchanged citizens in the way it has handled the health crisis, the harmless pantries could very well burn wild and hurt a bid at next year’s polls. And by all means, let these initiatives expose the sharp contrast between those who mean well and the indifference of people who only have their self-interest at heart.