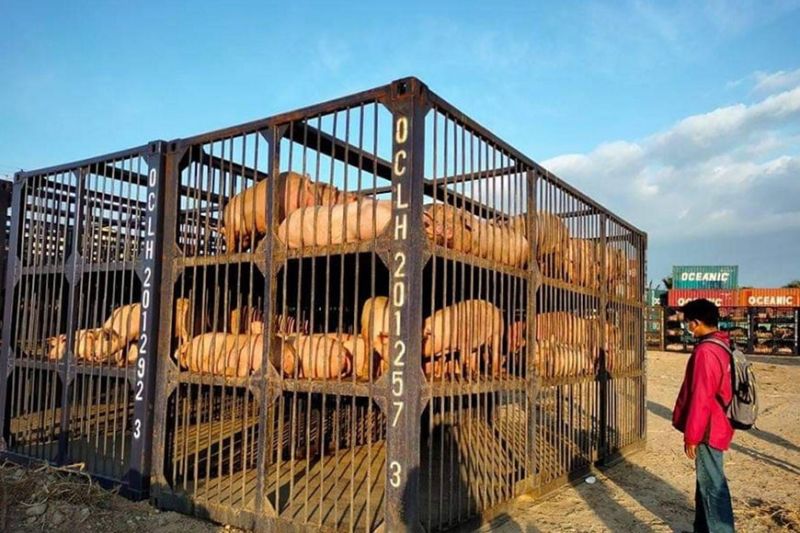 NEGROS. The Provincial Veterinary Office notes an increasing number of hogs being shipped from Negros Occidental to Luzon and other areas in the country. (Contributed Photo)

THE Provincial Veterinary Office (PVO) of Negros Occidental has noted an increasing trend in the number of hogs being shipped to Luzon, particularly for the months of January and March, as well as during the second week of April this year.

Provincial Veterinarian Renante Decena said there had been a significant drop in the number of hogs shipped for the month of February mainly due to the implementation of Executive Order 124 issued by President Rodrigo Duterte, imposing a 60-day price ceiling on pork and chicken in Metro Manila.

Though the February shipment went down to 10.2 percent or 1,896 heads from January's 37 percent or 6,894 heads, the live hogs shipment from Negros Occidental to Luzon is regaining its pace for the month of March with 27.3 percent or 5,088 heads shipped.

"This goes to show that April hog shipment will continue to increase. The number of hogs to be shipped to Luzon and other neighboring provinces will still rise," he added.

PVO records showed that from January to April 19 this year, a total of 18,635 hogs were already shipped outside the province to different destinations nationwide.

Of the number, 63.1 percent were sourced from registered commercial farms and 36.9 percent were from backyard raisers.

Most of the shipments were bound for Luzon, contributing 82.7 percent of the total hog shipment, while 16.6 percent and 0.67 percent were for neighboring provinces of Visayas and Mindanao, respectively.

Decena said despite of the province's sizeable increase of hog shipment to Luzon and other parts of the country affected by African Swine Fever (ASF), the local supply of hogs for the local pork consumers remains sufficient to meet the demands of the Negrenses.

The provincial veterinarian attributed this to the sustainable swine production initiatives and projects implemented by the provincial government particularly swine breeding herd build-up through dispersal of sows and breeder piglets, and establishment and operation of swine artificial insemination centers.

Also, recent hog production is bolstered by the ASF-free status of the province which paved way to increase interest and enthusiasm among swine raisers, both commercial and backyard, to engage in swine production expansion activity, Decena said.

Amid the continued increase in demand of pork, the current prevailing local market price of the product provincewide is P230 per kilo.

The live weight price, on the other hand, is ranging from an average of P130 to P190 per kilo.

"This means that there is no significant increase in pork prices in the market that may affect local consumers," he added.