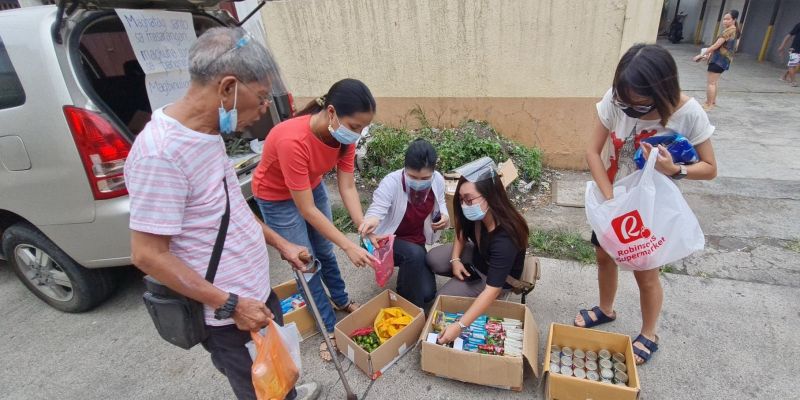 BACOLOD. The community pantry put up by a group of friends along 12th Lacson Street in Bacolod City Monday. (Erwin P. Nicavera photo)

THE “bayanihan” spirit among Bacolodnons and Negrenses was once again proven to be alive amid the prevailing coronavirus disease (Covid-19) pandemic.

How? This is through the community pantries put up by various individuals and groups whose ultimate goal is to stimulate compassion and spur help for others during these trying times.

In their desire to lessen the burden currently experienced especially by residents who are in dire need of food and other basic goods, 25-year-old Kim Lizares along with some of her friends spent their free time opening a community pantry along 12th Lacson Street in Bacolod City Monday, April 19, 2021.

It is one of the first few community pantries established in the city.

They brought with them donations they initially gathered from other friends including rice, eggs, vegetables, vitamins and medicines, among other products.

Lizares said because of the pandemic, many people have suffered and are still struggling, especially in providing for their family’s daily needs.

“So, in our own little way, we wanted to help other people and further spur bayanihan spirit among residents in the city," she added.

Inspired by the Maginhawa Community Pantry in Quezon City, their community pantry also upholds the concept of “Maghatag santo sa masarangan. Magkuha suno sa kinahanglan [Give what you can. Get what you only need].”

Lizares said their community pantry allows people to donate, as well as get some help.

“Through this community pantry initiative, we can also learn the value of sharing and taking what we only need by considering the needs of others,” Lizares said, as she encouraged other residents to also put up community pantries in their respective community.

At first, they just placed the donated goods at the back of her car parked beside the street.

A resident, who is also planning to put up a community pantry in the area, offered them space, as well as tables and canopy.

Minutes after it was put up and posted on social media, donations poured in from different groups and individuals, including those who just passed by the community pantry.

One of them was Phoebe Perez, who donated packs of noodles and biscuits.

“Since it's pandemic, many people have lost their jobs and some are even experiencing hunger so it is just fitting to extend some help,” she told SunStar Bacolod News.

The first to get some goods were residents, mostly senior citizens and children, living near the area where the community pantry was put up.

Sixty-nine-year-old Elmundo Lopez was able to get vitamins and other goods like eggs, noodles, sardines and milk from the community pantry.

“It’s really a big help. I am really thankful for this help, which I consider a blessing from God,” he said.

“Madamo gid nga salamat [Thank you so much],” he told the organizers.

For Lizares and her friends, the response of Bacolodnons to this initiative is overwhelming. This shows that many have hearts that are willing to help.

Aside from in-kind donations, they also welcome volunteers to be at the community pantry to ensure that minimum health protocols like wearing of face masks and face shields, as well as social distancing, are observed.

Other groups and individuals in the city also opened community pantries.

In Barangay 27, the Sowing Legacy Movement Inc., a non-government organization, unveiled its community pantry intended for residents in the area.

The group said this was inspired by the acts of love of fellow Filipinos.

"Magbinuligay kita. Atun pamatud-an kag ipalapnag ang gugma kag bugay sa pagpakita nga kita may matam-is nga tagipusuon para sa atun mga kasimanwa [Let us help each other. Let us prove and spread the love and blessing by showing that we have a sweet heart for our fellow city residents]," it added.

A milk tea shop along Araneta Street in front of the Negros Occidental High School also opened a small community pantry outside the store.

Some local government units in the province like Talisay City were also planning to establish community pantries in their locality.