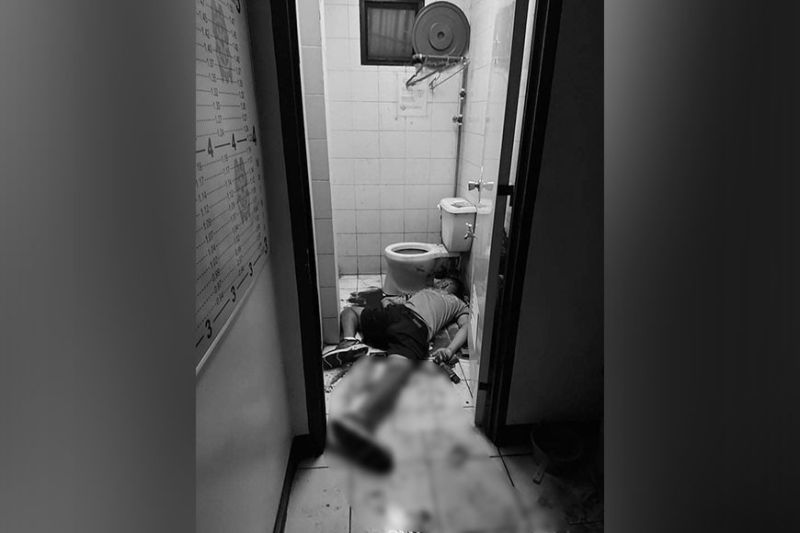 SUICIDE: Police Staff Sgt. Celso Colita, one of the Sawang Calero policemen facing a string of cases, lies dead inside the comfort room of the Regional Special Operations Group (RSOG) 7 in an apparent suicide. (Contributed by Help TV Cebu)

THE policeman of the Sawang Calero 11 shot himself dead inside the comfort room of the Regional Special Operations Group (RSOG) about four hours after the woman who accused him of rape while in police custody was shot dead on Monday, April 19, 2021 in Barangay Basak, Cebu City.

Police Staff Sgt. Celso Colita was one of the 11 members of the Sawang Calero Police Station who was accused by Ritchie Nepomuceno of raiding her house for firearms but had found none in March 2021, and of extorting her of P170,000.

Nepomuceno had accused Colita of raping her twice while she was in police custody.

According to a report from Help TV Cebu, Regional Drug Enforcement Unit (RDEU) 7 chief Police Maj. Glenn Hife was interviewing Colita about the "ambush" of Nepomuceno and his involvement in drugs.

Hife said he asked Colita if he had a hand in the killing of Nepomuneno and whether he knew that RDEU had "raw info" that he was involved in the illegal drug business.

Colita didn't reply and instead asked for permission to go the comfort room, Hife said.

Colita excused him and then heard a gunshot coming from the CR. He rushed there to find Colita lying in blood in an apparent suicide. Only hours earlier, just before 6 p.m., Nepomuceno was shot dead in Barangay Basak. (MPS)