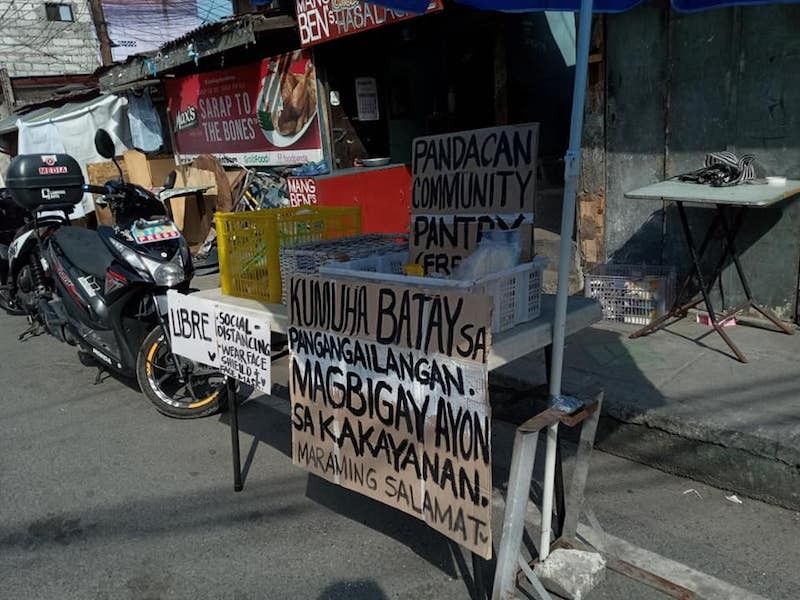 DISTRIBUTION of free basic goods at the Maginhawa Community Pantry in Quezon City was suspended Tuesday, April 20, 2021, after it was red-tagged by a government task force.

In Pandacan, Manila, a community pantry also suspended its activities after two policemen asked the volunteers to fill up a form seeking personal information.

Philippine National Police (PNP) Chief Debold Sinas said there is no order from the national headquarters to conduct profiling of organizers of community pantries.

Ana Patricia Non, who initiated the first community pantry in the country, said she wants to ensure her and the volunteers’ safety. She has called for a press conference later Tuesday.

A long queue of people expecting to get some free relief goods from the pantry dispersed early Tuesday after a volunteer announced the suspension of distribution.

(Bad news. We will suspend the Maginhawa Community Pantry tomorrow for our safety. We’re sad that we could not distribute the goods that we prepared because of red-tagging.)

In a Facebook post, Pandacan community pantry organizer Marikit Arellano said a commotion erupted when two policemen asked them on Monday to fill up a form.

The community pantry phenomenon began with a single wooden cart that Non set up on April 14, 2021 along Maginhawa St. in Diliman, Quezon City, with the sign, “Magbigay ayon sa kakayahan, kumuha batay sa pangangailangan.” (Give what you can, take what you need.)

Her initiative quickly caught fire and was replicated across the National Capital Region (NCR) as well as in the provinces of Rizal, Laguna, Cavite and Batangas, also known as NCR plus, which is under modified enhanced community quarantine (ECQ) due to a surge in coronavirus infections.

Community pantries have also been reportedly established in the provinces of Pampanga, Samar, Aklan, Cebu and Batangas.

On Monday, the National Task Force to End Local Communist Armed Conflict (NTF-Elcac) posted in its Facebook account graphics and photos linking the community pantries to the Communist Party of the Philippines.

It said the communist movement was using the initiative for a mass recruitment.

The Eastern Police District in Metro Manila, on the other hand, established its own community pantry in front of their headquarters in Pasig City.

Sinas, for his part, said it is beyond the interest of the PNP to delve into purely voluntary personal activities of private citizens.

“We are aware of the activities of these community pantries as an expression of bayanihan spirit, but we have no intention to interfere but to serve the best interest of law and order and public safety in such public activities,” he added.

He said Malacañang does not see it as a condemnation of government over its pandemic response.

“It shows the best of the Filipino. It is part of our psyche to help one another. I don’t see it as a condemnation of the government,” he said.

“It shows the best of us during the worst of times,” he added. (SunStar Philippines)