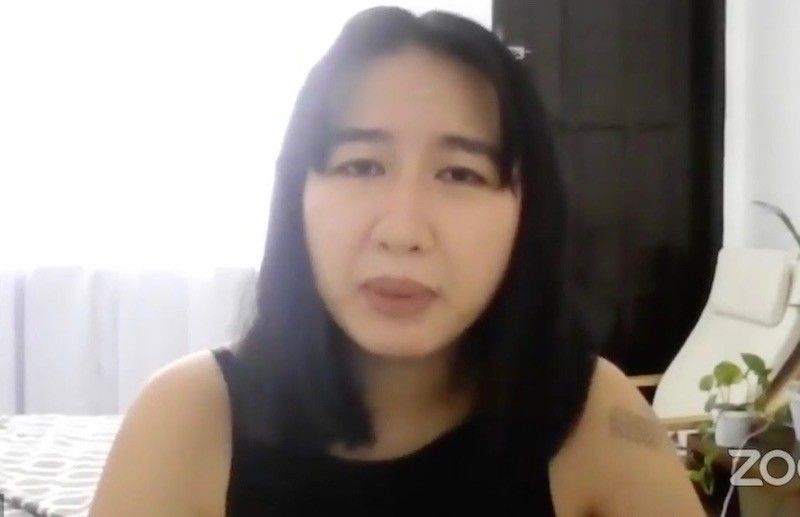 Ana Patricia Non initiated a community pantry on Maginhawa St. in Quezon City. Inspired by her initiative, others have also set up community pantries across Metro Manila and in other provinces nationwide. (Screenshot from Non's virtual press conference)

COMMUNITY pantry organizer Ana Patricia Non on Tuesday, April 20, 2021, said the Maginhawa Community Pantry will continue to distribute free basic goods to those in need after a one-day suspension, but stressed that the culture of intimidation directed at community pantries must stop.

Non said she welcomed the support of the Quezon City Government, but could not bring herself to trust the Quezon City Police District (QCPD) after the latter shared a social media post that red-tagged community pantries.

She denied the allegations of the National Task Force to End Local Communist Armed Conflict (NTF-Elcac) and the QCPD.

She said she planned to consult lawyers on how to resolve the matter.

The Maginhawa Community Pantry, which was launched on April 14, was suspended Tuesday because Non said she needed to coordinate with the local government units concerned to ensure her safety and that of the other volunteers in other community pantries across Metro Manila.

Non said the QCPD has sent her text messages, but she has not replied because she found it hard to trust the police after the red-tagging.

NTF-Elcac spokesperson Antonio Parlade Jr. admitted in a television interview on Tuesday that they are checking the background of community pantry organizers.

Parlade, a military general who heads the Southern Luzon Command, alleged that several anti-government groups were using the initiative to push their propaganda.

Non said several policemen had visited the Maginhawa Community Pantry and asked several times for her number, which she readily gave since it’s already available online.

She said she did not mind the police presence because she thought they were helping enforce quarantine protocols.

She merely requested that they avoid bringing firearms so as not to intimidate the volunteers and the people who availed themselves of the free goods.

She was alarmed, however, when the QCPD shared a post by anti-communist group Peace Philippines which linked the community pantries to the Communist Party of the Philippines (CPP).

Another community pantry in Pandacan, Manila, which was inspired by Maginhawa, also suspended activities Tuesday after some policemen asked volunteers to fill up a form requiring some personal information.

Non said she was a member of the University of the Philippines Student Council in college and noted that this helped her organize the community pantry.

She stressed that she does not have ties to the communist movement.

Non said her sole intention in establishing the community pantry is to help the families in need amid the pandemic.

Earlier, Department of the Interior and Local Government (DILG) Secretary Eduardo Año said organizers must adhere to existing laws and local ordinances especially those issued to prevent the spread of coronavirus disease 2019 (Covid-19).

“As to the issue of whether organizers are required to secure barangay permits, organizers should consult with the concerned barangays if such is required,” Año said.

Año also said the police should not interfere in the operation of community pantries, except in the maintenance of peace and order as well as in the enforcement of minimum heath protocols.

Año said there is no order for policemen to look into community pantries.

“The community pantry has been a traditional practice in our country as part of bayanihan culture and spirit especially in the times of calamities and disasters. Iba-iba lang ang pangalan: community pantry, food bank, soup kitchen, kapitbahayan and ayuda, among others. In the spirit of bayanihan, many Filipinos have been doing selfless acts of kindness since last year,” he said in a statement.

“As long as the intention is good and without political color, it should be encouraged and supported. Since this is a purely voluntary and private initiative, we should not interfere except to ensure that minimum health standards are complied with,” he added.

Año said the PNP or the local officials may just come in if there is any violation of law, complaints from the community, or if the organizers seek their help.

The government has set aside P22.9 billion as cash assistance for affected low-income families and workers in the informal sector, but not all local government units have completed the payout. Each family is entitled to a maximum of P4,000 while an affected individual will receive P1,000.

Malacañang earlier announced that no additional cash assistance could be expected because government no longer has the funds after more than a year of various levels of community quarantine. (Third Anne Peralta-Malonzo / SunStar Philippines)