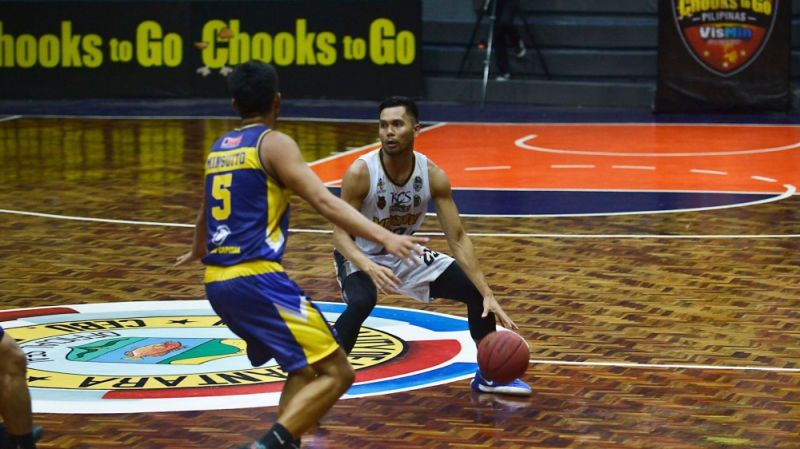 Gryann Mendoza led KCS with 19 points as they defeated ARQ Lapu-Lapu on Tuesday night in the VisMin Cup. / Chooks-to-Go

ALCANTARA—The KCS Computer Specialist-Mandaue City outhustled the ARQ Builders Lapu-Lapu City Heroes in the fourth period to come away with a 77-66 victory in the Chooks-to-Go Pilipinas VisMin Super Cup on Tuesday night at the Alcantara Civic Center in Alcantara, Cebu.

The win pushed KCS’ record to 3-1, good for solo second place right behind the undefeated MJAS Zenith-Talisay City, which sports a clean 5-0 mark.

Left-handed guard Gryann Mendoza shone for KCS as he scored 19 points, including a layup down the middle of the lane that gave his team a 71-62 lead with 2:21 remaining in the match. Mendoza also grabbed 10 rebounds, issued two assists and added a steal and three blocks in a stellar all-around effort.

Rhaffy Octobre chipped in 13 points including a couple of straightaway triples that sparked KCS’ breakaway in the fourth canto. The University of the Visayas product also had five boards and three blocks.

Monic Soliva also had his best game of the tournament so far with 10 points and nine boards.

Already undermanned due to the suspension of five key players, the Heroes’ job became even tougher after ace point guard and team captain Jerick Cañada limped out of the game in the second period after appearing to tweak something in his leg. He was not able to return to the ballgame.

Nevertheless, the Heroes still gave it their all, leading by as much as eight before KCS made their move in the third canto. With their defense forcing ARQ into turnovers, KCS unloaded 10 unanswered points to turn a 36-40 deficit into a 46-40 lead. They eventually took a 52-47 lead heading to the last period.

In the fourth, KCS poured it on with Octobre canning two three-pointers, Solera scoring inside and Mendoza converting a layup to build a 67-55 lead with just 4:06 remaining. A three-pointer by ARQ’s Vincent Minguito sliced KCS’s lead down to seven but Mendoza shut the door on any comeback by scoring on the next trip down.