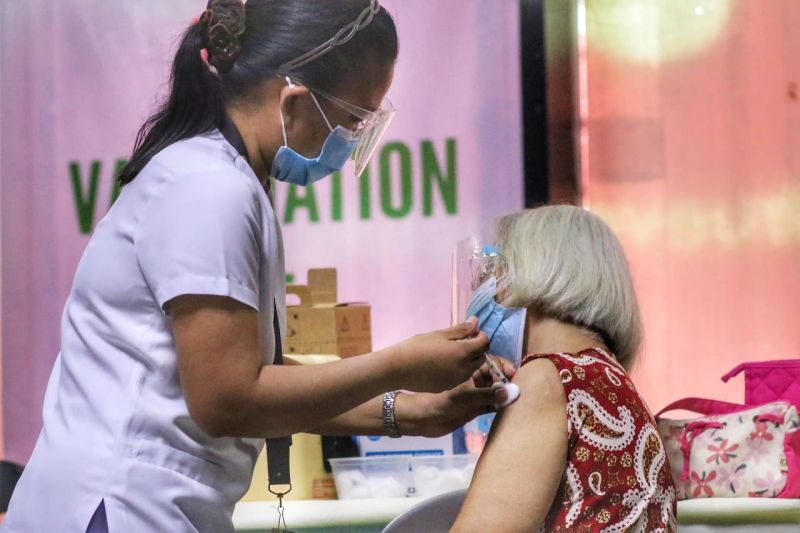 TO ENCOURAGE adults 60 years old and above, four Cebu City public officials—Vice Mayor Michael Rama, and City Councilors Joy Augustus Young, Lea Japson and Raul Alcoseba—set an example by having themselves inoculated against Covid-19 at the vaccination site in Robinsons Galleria Cebu on Tuesday, April 20, 2021, the second day of the vaccination rollout for the city’s elderly population.

Banishing fear from the minds of senior citizens who hesitated getting the Covid-19 vaccine was the aim of their actions, Rama, 66, said after his inoculation with a dose of Sinovac’s vaccine, which has an efficacy rate of just over 50 percent.

The vaccination campaigns in the cities of Cebu and Lapu-Lapu started on Monday, April 19 with both local government units inoculating over 900 senior citizens.

Senior citizens belong to Priority Group A2, which is made up of over 9 million elderly nationwide.

More than 25,000 senior citizens in Cebu City signed up for the vaccination as of Monday, April 19.

Priority Group A1 consists of around 1.76 million active healthcare workers, who started receiving vaccine jabs last March 1, a day after the arrival of 600,000 doses of Sinovac vaccine donated by China. It was the first vaccine shipment to reach the country.

Group A3 is composed of around 14.5 million persons with underlying medical conditions or comorbidities.

Group A4 consists of frontline personnel in essential sectors, including uniformed personnel and those in working sectors essential during the enhanced community quarantine period.

On Wednesday, April 21, at least 500 senior citizens from Barangay Subangdaku, Mandaue City are scheduled to receive Sinovac jabs at the Mandaue City Cultural and Sports Complex.

Manatad said there were more than 1,600 senior citizens registered for the vaccination in Barangay Subangdaku, but only 515 senior citizens decided with finality to receive vaccine jabs.

Subangdaku’s elderly are the first to receive the vaccine because the barangay completed and submitted its master list to the Vaccine Board first.

Last Friday, April 16, Manatad said they received 1,180 doses of Sinovac intended for the remaining more than 1,000 medical workers to be inoculated.

The Vaccine Board’s latest survey says that fewer than 200 medical workers are willing to get vaccinated. With that, Manatad said the board decided just to start inoculating the senior citizens.

Manatad said there are at least 980 vaccines available for the senior citizens Wednesday, April 21. (PAC, KFD)