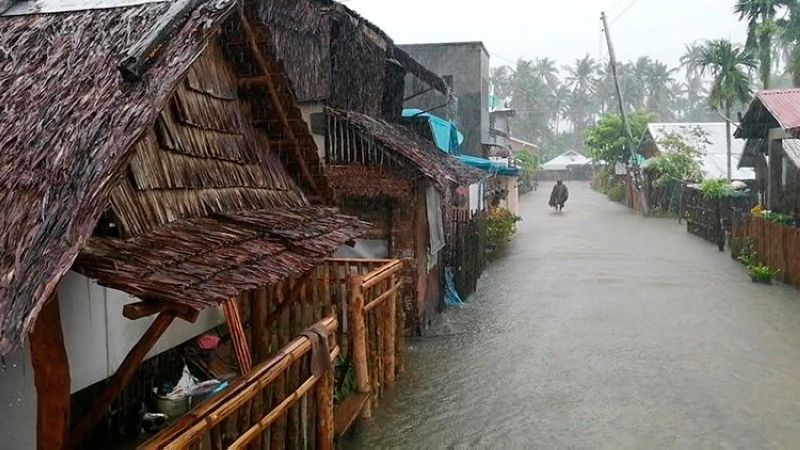 EASTERN SAMAR. In this photo provided by the San Policarpo Fire Station, a man wades through floodwater caused by Typhoon Bising (Surigae) in the municipality of San Policarpio, Eastern Samar on Sunday, April 18, 2021. (AP)

OVER P10.5 million worth of infrastructure and nearly P46 million worth of agriculture products were damaged due to the onslaught of Typhoon Bising (international name Surigae) in southern Philippines, the National Disaster Risk Reduction and Management Council (NDRRMC) said on Wednesday, April 21, 2021.

The death toll from the typhoon has increased to three while a 40-year-old man from Barangay Dao in San Jose, Northern Samar remained missing.

The NDRRMC said 10 individuals were injured due to the typhoon’s strong winds and rain.

The fatalities were from Central Visayas, Eastern Visayas and Davao. They were hit by fallen trees.

The population affected by the weather disturbance in Bicol, Eastern Visayas and Caraga have increased to 59,098 families, or 229,829 persons.

NDRRMC said P171,156.20 worth of assistance has been provided to the affected population.

The NDRRMC also said 84 houses in Bicol, Eastern Visayas and Caraga were destroyed while 935 were damaged.

A total of six road sections and one bridge were reported not passable while 68 incidents such as flooding, fallen trees and sea mishap were reported.