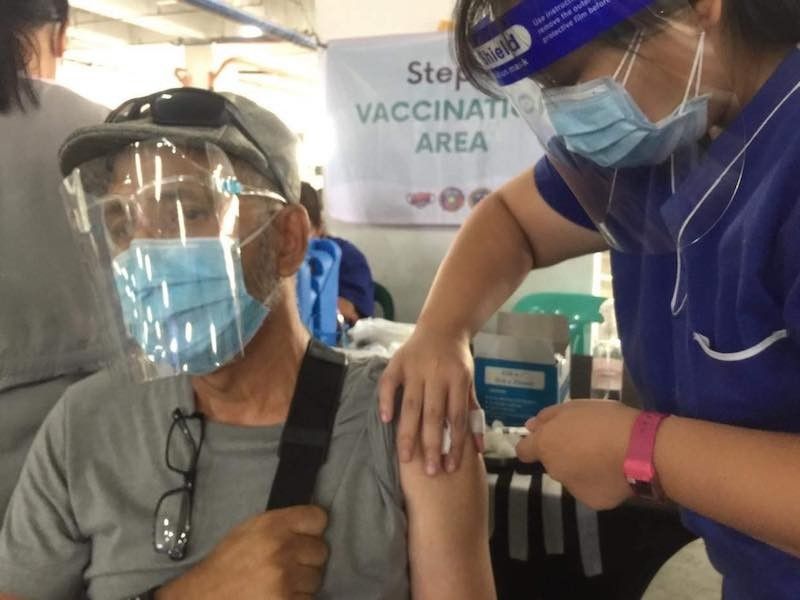 MANILA. In this photo taken on April 14, 2021, a senior citizen in Parañaque City is inoculated against Covid-19. (Contributed via Third Anne Peralta-Malonzo)

AFTER declining for three days, coronavirus infections went up again as the Department of Health (DOH) reported 9,277 new cases on Wednesday, April 21, 2021.

The DOH also listed 124 deaths on Wednesday, after two days of below-100 daily mortality count.

Time-based recoveries refer to coronavirus-positive individuals who have not experienced Covid-19 symptoms for at least 14 straight days.

In its case bulletin Wednesday, the DOH listed a cumulative case count of 962,307, including the 9,277 new infections.

The death toll from Covid-19 increased to 16,265, with the additional 124 mortalities. The case fatality rate remained at 1.69 percent.

Based on its time-based recovery methodology, the DOH reported 19,699 new recoveriess, raising the total to 829,608 and further reducing the active cases to 116,434.

The DOH case bulletin also showed that 19.5 percent of the 37,235 samples tested as of April 19 turned out positive.

Beginning Wednesday, DOH said the testing data reported in its case bulletin would be based on the output from accredited laboratories two days earlier to lessen confusion over the incomplete data.

Prior to Wednesday’s case bulletin, the DOH has been reporting testing output as of noon of the previous day in its case bulletin.

In its situationer report as of April 19, the DOH said 747 patients were in critical condition while 944 were severely ill. Around 96 percent of the cases were mild and the rest were asymptomatic.

The National Capital Region (NCR), or Metro Manila, continued to post the highest 14-day running total of new cases, based on the DOH tracker.

Among the cities and provinces, Quezon City continued to post the highest number at 12,374 for the same period, followed by Cavite with 8,656 and Manila with 7,475.

Meanwhile, the DOH said the number of individuals who have received their first dose of a Covid-19 vaccine has increased to 1.35 million as of April 20, 2021.

Of this number, 209,456 have also received their second dose.

A total of 1,562,563 doses have been administered across the country since the vaccinations started on March 1.

The DOH also said all the 3,025,600 doses that have arrived in the Philippines as of April 11 have been distributed to 3,263 vaccination sites nationwide.

The Philippines received 2.5 million doses of the Sinovac inactivated vaccine and 525,600 doses of the adenoviral vector AstraZeneca vaccine.

Eligible for vaccination are Priority Groups A1 (health workers), A2 (senior citizens) and A3 (persons with comorbidities). (Marites Villamor-Ilano / SunStar Philippines)