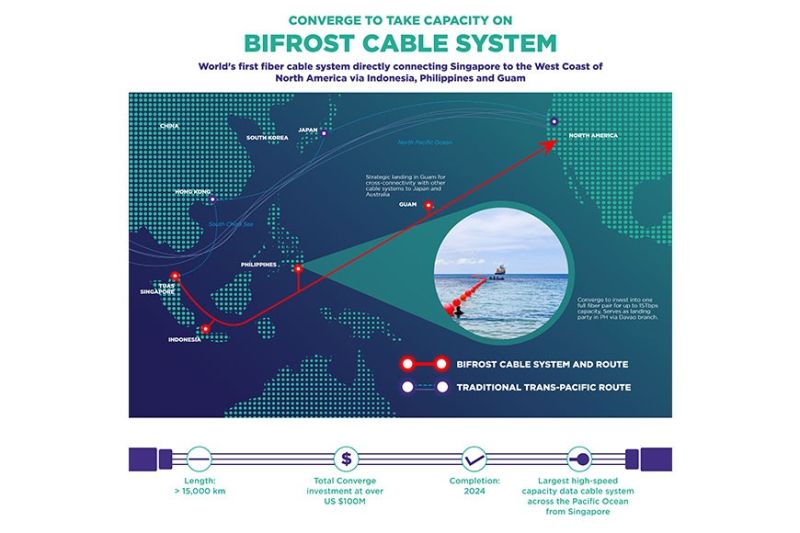 KEPPEL Midgard Holdings Pte. Ltd. (KMH) has signed a binding term sheet with Converge Information and Communications Technology Solutions Inc. (Converge) to grant the latter an Indefeasible Right of Use (IRU) for one fiber pair on the main trunk of Bifrost Cable System, which directly connects Singapore to the west coast of North America.

In addition, KMH and Converge will jointly develop a branch on the Bifrost Cable System that will land in Davao, Philippines, with Converge also being granted an IRU on the entire Davao branch. Converge will be engaged as the landing party for the Davao branch segment.

The additional branch will significantly increase internet speeds and network diversity for businesses and consumers in the Philippines.

Converge will invest over US$100 million (around P5 billion) for the whole project.

Thomas Pang, chief executive officer of Keppel T&T, said, “We are pleased to partner Converge through Bifrost, which is a significant transnational infrastructure project, enhancing the inter-connectivity between ASEAN countries. Through this partnership, we will be able to accelerate the growth of our connectivity platform, which is in line with Keppel’s Vision 2030, as well as explore synergies with not only Keppel’s data centres, but also Converge’s data centre business.”

Dennis Anthony Uy, CEO of Converge, said, “This is an important milestone not just for Converge but also for the Philippines as we expect to experience faster internet speeds and greater resiliency within our fast-growing fibre network with the completion of this project. Our investment into one full fibre pair, connecting us to Singapore and the west coast of North America, will allow us to independently activate at will up to 15Tbps of capacity to either country using the latest technology."

"Furthermore, our ongoing construction of our National backbone spanning the whole country will allow Converge to distribute this capacity from Davao to any point in the Philippines. We look forward to a continued strong collaboration with Keppel to bring our countries closer together and further enhance the connection of the region to the rest of the world," Uy added.

Southeast Asia is one of the world’s fastest growing internet markets. According to a report from Google, Temasek and Bain & Company, as many as 40 million people in six countries across Asean, including the Philippines, came online for the first time in 2020, increasing the total number of internet users in those Southeast Asian countries to 400 million -- or nearly 70 percent of the population.

To be jointly owned and developed with Keppel T&T’s partners, the Bifrost Cable System, which will be the largest capacity high-speed transmission cable across the Pacific Ocean when completed, will bolster Singapore’s role as a digital hub for the region.

Completion of the proposed transaction with Converge is subject to negotiation and execution of definitive agreements, and relevant regulatory approvals.

As the transaction proceeds, Keppel T&T will make the necessary announcements when there are material developments.