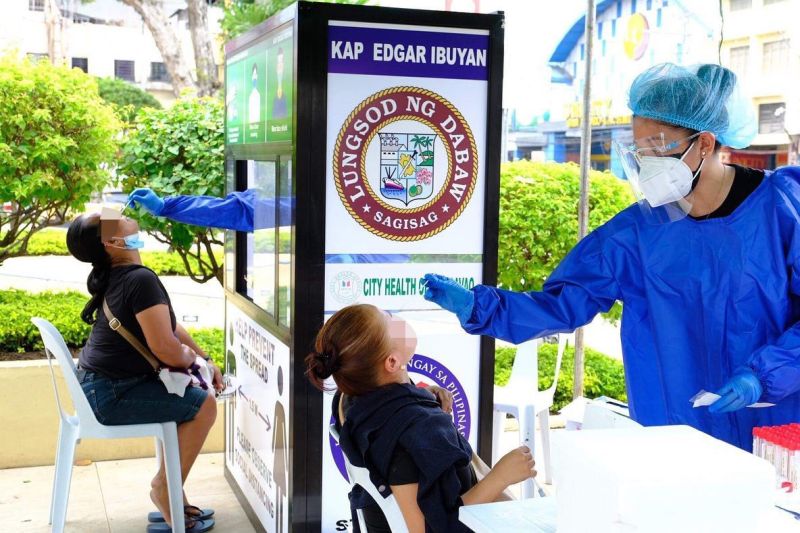 WITH only a number of persons tested positive for coronavirus out of the nearly 5,000 swabbed individuals in the city’s heightened community surveillance, an official from the Davao City Health Office (CHO) assumed that the city continuously experiences “low” transmission of the virus.

CHO Acting Head Dr. Ashley Lopez said in a radio interview the City already swabbed 4,577 individuals as of Monday, April 19, 2021. Out of the number, only 57 tested positive. But this does not include the sidewalk vendors along People’s Park, San Pedro, Bolton, and Magallanes streets who were swabbed on the same day at the People's Park.

Despite yielding few positive individuals, he said this is not a sign that they would stop with their community swabbing.

"Ang positivity rate nato is very low, pero dili gihapon ta mag-undang (but we won’t stop). We have to continue. Ingon pa sa atong (According to) Mayor Inday Sara [Duterte-Carpio], kinahanglan nato ipadayon ang surveillance so that atong mapugngan ang pagdaghan sa kaso (we need to continue with our surveillance so we could prevent cases from increasing)," Lopez said in an interview with 87.5 FM Davao City Disaster Radio.

The City Government intensified community swabbing following the issuance Executive Order 18, which orders for the "heightened surveillance and response" for the Covid-19 cases in the city.

Part of the EO’s mandate is to make a regular schedule of surveillance swabbing in high-risk areas without implementing the mandatory home quarantine post-swabbing such as but not limited to: business and commercial establishments (i.e. business process outsourcing, banks, restaurants, etc.); public places (i.e. wet markers, supermarkets, stores, etc.); and government offices.

The City had recently conducted its surveillance swabbing in wet markets and sidewalk vendors in early April, including the vendors at Sta. Ana Avenue, Monteverde Avenue, Magsaysay Street, Quezon Boulevard and within Magsaysay Park.

The city's average active cases are currently around 400.

"Kaning (These) 400 active cases, kung ato ning pabay-an, labi natong ilang close contacts, mga direct contacts niini, mudaghan gihapon ni sila (if we won’t do anything about them, especially to their close and direct contacts, there is a possibility that more will be infected)," he said, adding that the surveillance swabbing is an "effective" way to sustain the low cases in the city.

Lopez said the city's Covid-19 cases continue to be manageable despite noting a slight increase on the number of active cases due to the intensified testing.

He said the city was able to exceed 1,000 specimens tested on some days, adding that there is a possibility that cases will continue to increase in the coming days but it will not be significant compared to the previous days.

"In spite of so much testings na atong ginabuhat adlaw-adlaw, gamay ra atong positive yield (that we did every day, we were only able to yield few positive patients)," Lopez said, adding that they are hoping the data would show that the city has already curbed the transmission of the Covid-19.

Lopez also noted that the city recorded a low number of recorded deaths compared in the previous months.

"That means we can accommodate already moderate, severe, ug (and) critical cases particularly sa (in) SPMC," the health official said.

He also revealed that most recorded deaths are senior citizens and those with pre-existing medical conditions and comorbidities that complicate their Covid-19 condition.

Meanwhile, Lopez said they already have schedules of surveillance swabbing in selected establishments until the end of the month, which are based on the reported clustering of cases.