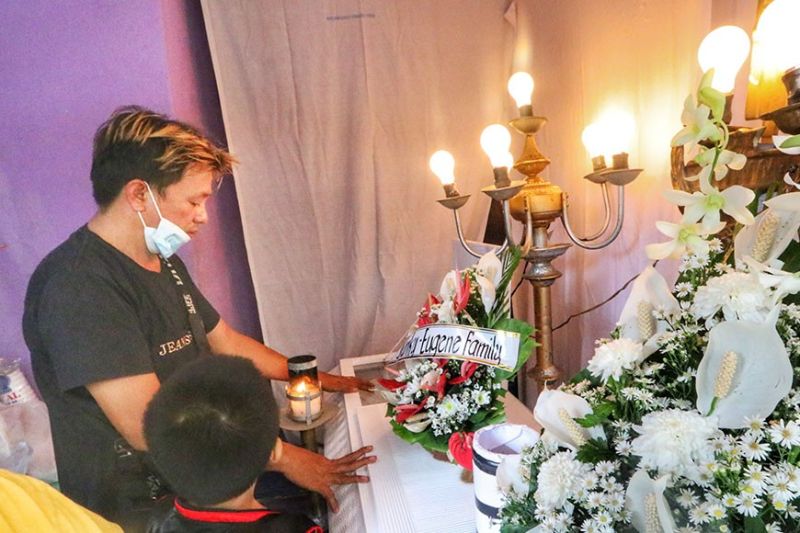 HUSBAND’S GRIEF. Danilo Nepomuceno visits the wake of his wife, Ritchie, in Barangay Quiot on Wednesday, April 21, 2021, two days after Nepomuceno was shot to death by motorcycle-riding assailants. Danilo said Ritchie, 35, had sent him text messages on Monday morning, April 19, hours before the fatal attack in which she had asked if the two of them could mend the cracks in their relationship. / AMPER CAMPAÑA

CEBU City Mayor Edgardo Labella has promised to give legal assistance to the family of Ritchie Nepomuceno, the complainant against erring police officers who was gunned down on Monday night, April 19, 2021.

The investigators of the Cebu City Police Office (CCPO), for their part, are still gathering information to identify the two men aboard a motorcycle who fatally attacked Nepomuceno in Barangay Basak Pardo.

CCPO Director Josefino Ligan said his investigators will talk to Nepomuceno’s husband, Danilo, after the latter admitted that Nepomuceno had sent him text messages on Monday morning.

The security cameras from establishments in the area will be checked to determine the license plate of the assailants’ motorcycle, Ligan said.

Danilo was urged by Labella to visit his office or the City Legal Office.

The mayor has instructed City Legal Officer Rey Gealon to aid Nepomuceno’s family with their legal needs, and he also urged the National Police Commission to conduct a “no-nonsense” investigation.

Nepomuceno was the first complainant who came forward to blow the whistle on the 10 police officers at the Sawang Police Station of the CCPO.

The 10 police officers, including team leader Staff Sgt. Celso Colita, were operatives of the station’s drug enforcement unit when they allegedly robbed Nepomuceno of more than P100,000. Colita himself allegedly raped Nepomuceno twice inside a motel.

Nepomuceno had lodged her complaints before the Commission on Human Rights (CHR) 7, but she later sought the help of the Integrity Monitoring and Enforcement Group (IMEG) Visayas Field Unit of the Philippine National Police, which investigates shenanigans of cops.

The Police Regional Office (PRO) 7 subsequently ordered the relief of the 10 police officers and transferred them to the regional headquarters in Cebu City while facing investigation.

The Sawang Calero police chief was also relieved from his post for his alleged failure to supervise his subordinates and he was transferred to the CCPO headquarters. This was why they became known as the “Sawang Calero 11,” but the actual number of officers who arrested and robbed Nepomuceno was only 10.

Hours after Nepomuceno’s killing, Colita reportedly took his own life using a .45 pistol inside the comfort room of one of the offices at the PRO 7 headquarters. He was on a toilet break while in the middle of an investigation by a superior officer, who had asked him if he had played a hand in Nepomuceno’s murder—a question that failed to elicit an answer from the “quiet” Colita.

A log at the PRO 7 gate shows that Colita ventured outside the headquarters for a medical checkup at 8:37 a.m. Monday, April 19. He was escorted by another police officer as Colita and his fellow former Sawang Calero Police Station operatives were under camp restriction pending the result of the administrative investigation.

Investigators would have to determine the source of Colita’s pistol as his government-issued firearm had been sequestered after his relief.

Colita, a married man, was reportedly engaged in an illicit affair with Nepomuceno, who for her part was reportedly a lover of a jailed big-time drug personality.

Before her murder, Nepomuceno told IMEG Chief Alejandro Batobalonos that she wanted to break off her relationship with the jailed drug personality, who reportedly threatened to kill her if she would do so.

Ligan said they would check if the drug personality ordered the hit.

The police official said they received information that Nepomuceno was very active in the illegal drug trade after the arrest of her lover, the big-time drug personality.

Ligan said a weekly delivery of five kilos of shabu was often received by Nepomuceno, who would then dispose of the contraband to pushers.

The CCPO chief’s information about Nepomuceno has left a bad taste in the mouth of CHR 7 chief investigator Leo Villarino.

“They (police) must have their own sources, but my question is why this information is surfacing when the victim and police officer Colita are no longer around to refute or deny it,” he said in a mix of English and Cebuano.