2 from Cebu among 4 dead in Surigao maritime mishap 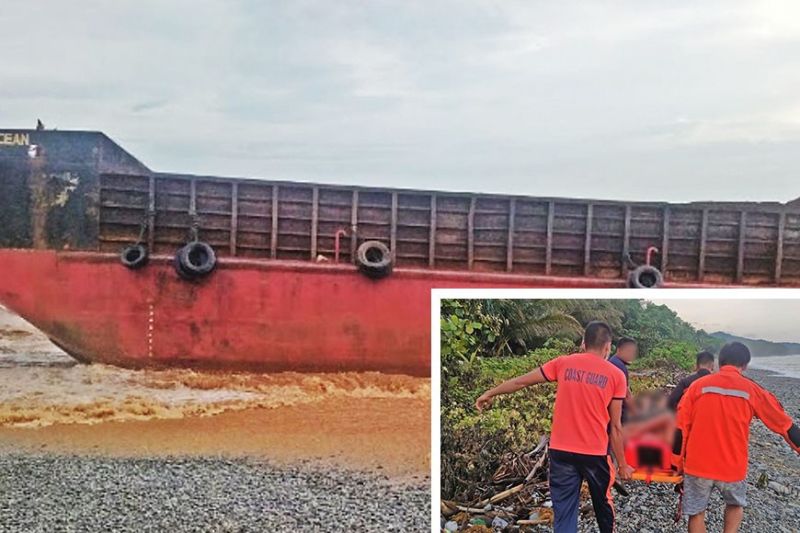 SHIP HITS SURIGAO SHORE. Huge waves brought by typhoon Bising caused cargo ship LCT Cebu Great Ocean to run aground along the shoreline of Barangay Cantapoy in Malimono town, Surigao del Norte on Monday afternoon, April 19, 2021. The accident cost the lives of four crew members, two of them Cebuanos. The Philippine Coast Guard and the Philippine National Police-Maritime Group are leading the efforts to search for the remaining crew members who have yet to be accounted for. Earlier, concerned citizens helped rescue some survivors. / PHILIPPINE COAST GUARD

The ship, which is loaded with nickel ore and about 2,000 liters of diesel fuel, was battered by big waves caused by Typhoon Bising.

The typhoon’s rainbands and powerful winds affected parts of the Visayas and Mindanao, causing authorities to suspend sea travel as early as Friday, April 16.

As of 1 p.m. Wednesday, April 21, the Philippine Coast Guard (PCG) said seven crewmembers have been rescued while the bodies of four others have been recovered.

Search and rescue operations for nine other crewmembers were still being conducted Wednesday by the PCG Surigao del Norte Station and the Philippine National Police Maritime Group.

Villanueva is from Brgy. Linao, Talisay City while Quebuen is from Asturias town, also in Cebu. Both, along with Polo, are being treated at the Caraga Regional Hospital.

The rest were brought to the Malimono Regional Health Unit.

The bodies of Norman Galon, Michael Inoc, Jose Sherwin Laniba and Mark Evan Cuesta were found on the shores of three barangays.

Galon, who was from Sitio Galaxy, Brgy. Maguikay in Mandaue City, Cebu was found in Brgy. Balite.

The bodies of Inoc and Laniba were both found in Brgy. Jubgan.

In a statement Wednesday, the PCG said it deployed a land mobility vehicle to search for the missing crew on the shores of Malimono and San Francisco.

The PCG said the shipowner also deployed a private plane to conduct an aerial survey over the waters of Malimono and San Francisco.

In a statement posted on his official Facebook page, Gullas said he had requested his personnel to coordinate with authorities in Surigao del Norte.

Villanueva is receiving treatment at the Caraga Regional District Hospital in Surigao City.

Gullas assured Villanueva’s family that the City Government will do everything to assist him.

“For now, we are focused on providing assistance to Mr. Villanueva and his family, including facilitating his trip back to Cebu. We are also planning to provide psychosocial intervention for Mr. Villanueva due to trauma that he suffered during the incident,” Gullas added. (JKV / ANV)
< Previous PageNext Page >