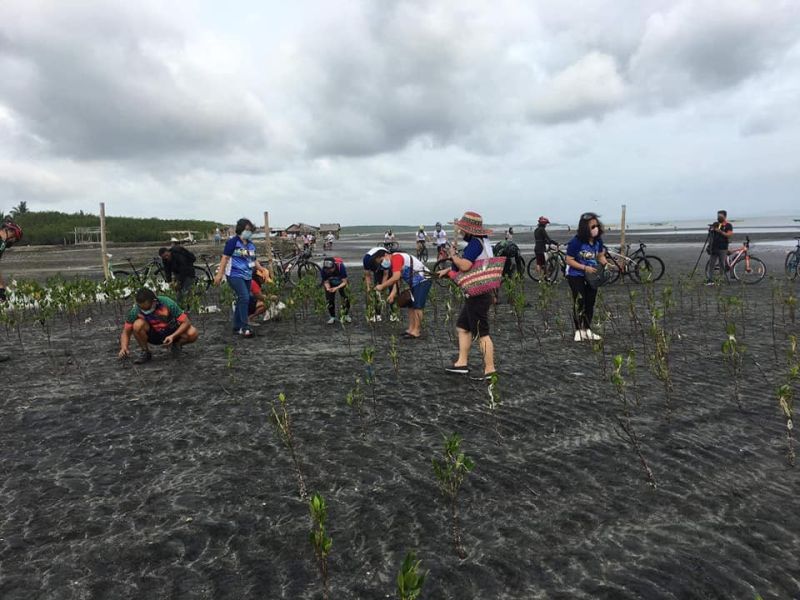 BAGO. About 70 participants of the “Bike and Mangrove Planting” plant 500 mangroves in Barangay Sampinit in Bago City Wednesday as part of the Earth Day celebration in the province. (Olive Seruelo photo)

SOME 500 bakhaw and bungalon species of mangroves were planted by about 70 participants of “Bike and Mangrove Planting” held in Barangay Sampinit, Bago City Wednesday morning, April 21, 2021.

Spearheaded by the Social Action Center of the Diocese of Bacolod and the Provincial Environment Management Office (Pemo), the activity was part of the Earth Day celebration in the province.

The 500 mangroves were planted in the five-hectare mangrove site of “Panggas,” a project of the Diocese of Bacolod, Provincial Government of Negros Occidental and Catholic Education Association of the Philippines.

The City Government of Bago provided the area in Barangay Sampinit as a mangrove reforestation site of “Panggas” by virtue of a Memorandum of Agreement signed three years ago.

Aside from mangrove planting, participants also conducted a clean-up activity where they collected two sacks of plastic wastes.

"'Panggas' means to plant. It is a project that was launched to contribute to finding solutions to the climate crisis problem," Pemo said.

The activity was in line with the three-day Earth Day celebration themed “Restore Our Earth,” as well as of the 500 years of Christianity this year, it added.