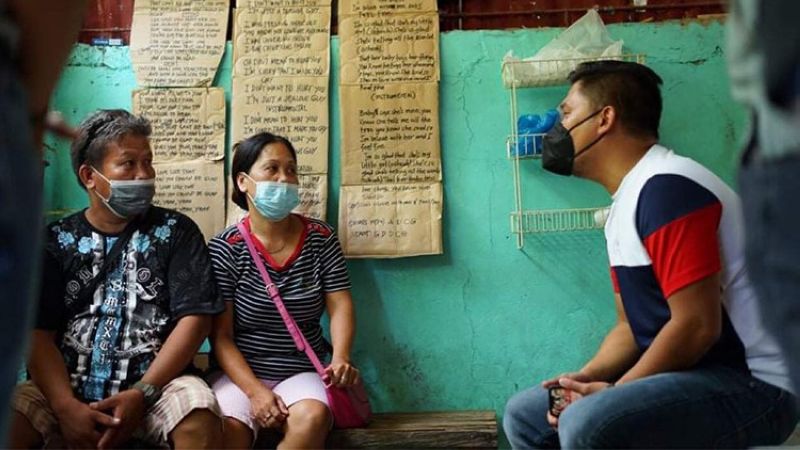 JOJIE Villanueva, one of the 20 sailors of the ill-fated LCT Cebu Great Ocean that ran aground in a coastal town in Surigao del Norte on Monday, April 19, 2021, was able to survive his ordeal by clinging to his life vest for at least two days before he was rescued.

This was according to Lisa Villanueva, Jojie's mother, who spoke to reporters on her son's ordeal on Thursday, April 22.

Lisa told reporters that a day before the incident, she was able to speak to her son on the phone as they were traveling towards Mindanao.

READ: 2 from Cebu among 4 dead in Surigao maritime mishap

Jojie and his family are residents of Barangay Linao in Talisay City.

Lisa recalled that while she and her son were talking on the phone, she heard the sound of strong waves in the background.

When she inquired her son about it, Jojie told her that they were traveling on choppy waters due to the effect of Typhoon Bising.

But Jojie assured her that he and the rest of the boat's crew were safe since they were currently anchored in a safe area. Lisa, however, cannot disclose where her son and his fellow crew members were docked at the time.

"I asked my son to be vigilant and even asked him to keep praying his rosary while they were traveling," Lisa said.

The day after they spoke, Lisa said she no longer received any messages from Jojie.

But she became anxious when one of her daughters told her that she received a message from Jojie, asking her to pray for him.

Concerned for his son's safety, Lisa texted her son to continue praying his rosary.

But Jojie never replied to her text messages for the entire day, she added.

It was only on Wednesday, April 21, when she heard reports of what happened to the boat where her son was onboard.

Lisa said she immediately contacted the shipping company where Jojie works to get updates on her son's condition.

She was reportedly told by the shipping firm that Jojie and 18 of the vessel's crew members initially reported to them that they were safe after they were able to escape the boat through life rafts.

But she was told by the firm that they needed to be rescued immediately as their life rafts were reportedly collapsing due to the strong waves.

Aside from that, there were no more updates from the crew concerning their status, Lisa said.

It was only through relatives living in Mindanao that Lisa knew of her son's fate.

Her son reportedly got separated from his fellow crew members after their life raft collapsed due to the strong waves.

For two days, Jojie only depended on his lifejacket for survival as he floated aimlessly in the ocean.

According to those who rescued him, Jojie reportedly swam upon seeing the shore of a nearby island.

Jojie was one of seven crew members who survived the ordeal. Around four crew members, two of which are Cebuanos, were found dead while nine others are still missing.

Gullas also assured Lisa that they assist her son who is currently being admitted at the Caraga Regional District Hospital in Surigao City.

He also assured Lisa that he will bring her son home. (JKV)