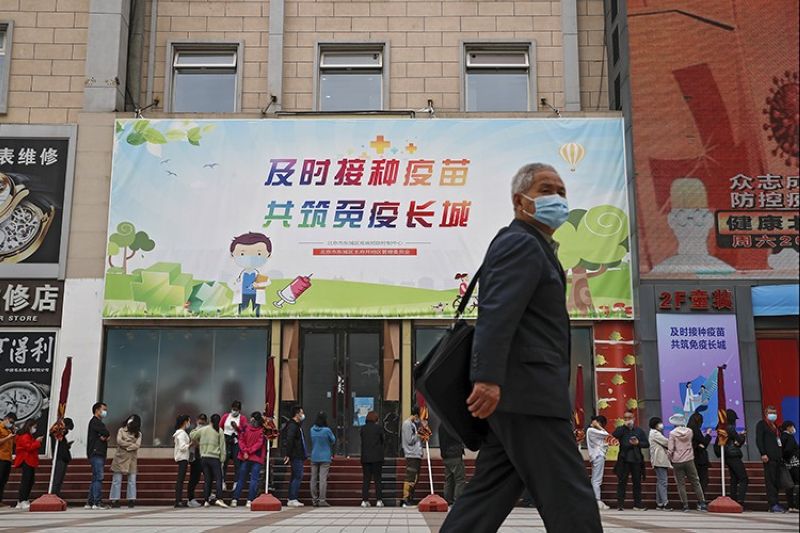 A man wearing a face mask to help curb the spread of the coronavirus walks by masked residents lining up for Covid-19 vaccine at a vaccination site with a board displaying the slogan, "Timely vaccination to build the Great Wall of Immunity together" in Beijing, Wednesday, April 21, 2021. (AP Photo)

BEIJING — Around 200 million doses of COVID-19 vaccine have been administered so far inside China, with an emphasis on front-line workers, university students and people living in border areas, health officials said.

China is ramping up vaccination efforts after a slow start that was due in part to the virtual elimination of domestic transmission of the coronavirus. Just two local cases were reported on Wednesday, both in the city of Ruili, which borders on Myanmar.

Just six new cases were reported on Thursday, all of them imported, while testing continued in Ruili, where China's latest outbreak appears to have been contained.

China has approved five domestically produced vaccines and exported millions of doses, although some scientists believe they provide less protection that those by Pfizer, Moderna and AstraZeneca. The Chinese vaccines have an efficacy range of 50.7% to 79.3%, based on company data, lower than their foreign peers but still effective.

The vast majority of vaccines being administered in China require two doses, while smaller numbers of vaccines requiring just one dose or three doses are also available.

It wasn’t immediately clear how many people were now fully vaccinated with all their required doses.

“At present, vaccination efforts in key areas and key population groups are progressing smoothly overall,” Cui Gang, an official with the Center for Disease Control, told reporters at a news conference Wednesday. Already, 80% of workers in the health sector have received at least one injection of vaccine, Cui said.

Cities across China have been reporting shortages with some people saying they could not get an appointment to get a second dose, National Health Commission spokesman Mi Feng said. Health officials acknowledged the difficulties and said local governments should aim to make sure the second shot of the two-dose vaccines was provided within eight weeks.

China is giving millions of shots a day, and its goal is vaccinating 560 million of the country’s 1.4 billion people by mid-June.

China locked down the city of Wuhan for more than two months starting in January 2020 after the coronavirus was first detected there in late 2019. Wuhan became known as the epicenter of the pandemic, although Beijing has suggested the virus might have been circulating earlier and possibly brought to China from abroad.

Since then, China has controlled the virus through stringent border controls and quick lockdowns whenever new outbreaks crop up. Mask wearing indoors remains almost universal and health tracing applications must be shown at most shops, offices and public buildings.

While China was the first major economy to throw off the effects of the virus, the restrictions are seen as limiting its further growth, particularly as Beijing readies to welcome tens of thousands of visitors as host of the Winter Olympics in February 2022.

Along with the sheer scale of the vaccination effort, authorities need to convince a population that largely no longer feels threatened by infection. (AP)