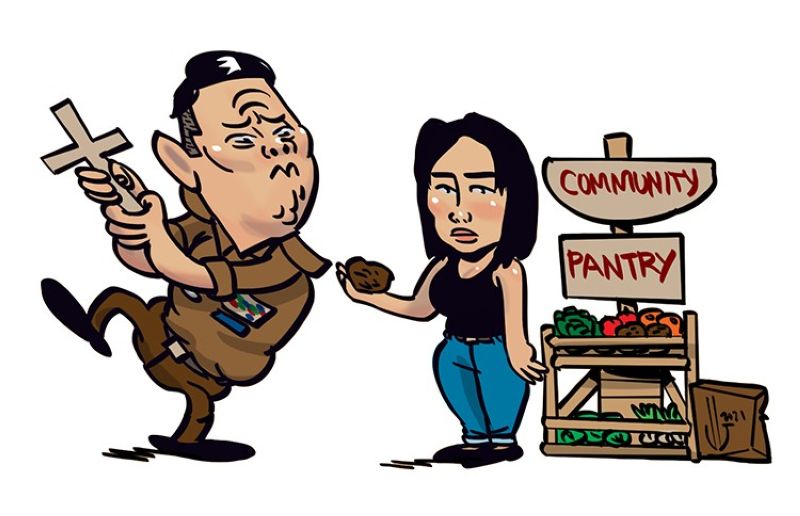 EASILY tucked under public zeal on community pantries are the manner and audacity that National Task Force to End Local Communist Armed Conflict (NTF-Elcac) spokesperson Lt. Gen. Antonio Parlade Jr. admitted to profiling organizers behind the initiatives. The Philippine National Police (PNP), through its Chief Debold Sinas, at least had the scruples, assuring the public that the police force had not sent out its men to extract information from the organizers, although the Maginhawa Community Pantry had to pause after its facilitator Ana Patricia Non feared for her security following a police visit.

What makes Parlade’s admission of surveillance dangerous is that it is matched with his rather convoluted thinking. Take his statement, for instance, in a television interview: “Isang tao lang, si Anna, si Patricia ‘di ba? Same with Satan. Si Satan binigyan ng apple si Eve. Doon lang nagsimula ‘yun, du’n lang nagsimula ‘yun (That’s just one person, Anna, Patricia, right? Same with Satan. Satan gave Eve an apple. That’s where it all began).” By Parlade’s scriptures, the thousands of famished citizens down the road just partook of the original sin.

Non picked up on community mutual aid concepts and created her own in her neighborhood after seeing a frustrating void since the rigid quarantine. Jeepney drivers, vendors could hardly get by with government aid coming only in trickle if not delayed. If that donated heap of sweet potato jumps out in the eyes of Parlade as an act to overthrow government, we can only imagine our taxpaying selves losing the P19.1 billion NTF-Elcac budget to an organization with delusions of persecution.

You call it caution, but it is in fact a dangerously outright admission of a surveillance state. And that’s how Parlade’s game encroaches the line. Allowing the ease and savvy for the NTF-Elcac to just pry under anyone’s sheets only gives consent to giving up our basic right to privacy. It also assumes that profiling organizers of community aid initiatives solves a problem, whatever Parlade thinks that is.

Incidentally, the National Privacy Commission on April 22,2021, said it is “gravely concerned” with Parlade’s statement, condemning the “unjust profiling” by state forces of community pantry organizers. At the outset of the Maginawa Community Pantry, the NTF-Elcac and the Quezon City Police Office at the speed of light posted graphics linking it to the communist movement. Note the aplomb, the shamelessness and impunity with which they are doing it.

And so we call for accountability, and that comes as our support to legislation that will defund NTF-Elcac, which is made even more urgent by this pandemic when we have public health as paramount priority.

Senators Joel Villanueva, Sherwin Gatchalian and Nancy Binay had come out as the new voices against the NTF-Elcac. On April 21, Villanueva, after hearing of Parlade’s Satan, tweeted, “Oh my! We should move to defund NTF-Elcac in the next budget. Sayang lang pera ng taong bayan (The people’s money is going to waste).” The senator proposed to reallocate the anti-communist body’s budget to subsidize Filipinos in dire need during this crisis. Gatchalian reacted to Villanueva’s tweet, saying, “I agree, bro. If these are the kind of people who will spend hard-earned taxpayer’s money, then it’s not worth it.” Binay, in an interview, said it’s “high time” that the NTF-Elcac’s budget must be reviewed.

These three senators join the opposition senators who have been persistently calling for a budget slash on the anti-communist body’s funds. A budget realignment doesn’t come easy though. The Bayanihan law 1 and 2 would require an act of Congress to come up with an enabling law to use public funds for subsidies during the pandemic. What is crucial now, however, is to show the likes of Parlade a public distaste over their demeanor.

The Armed Forces of the Philippines (AFP) for a good number of years now had itself admitted it has been winning the war against insurgency, so why the bloated figures? The NTF-Elcac’s budget has been used in anti-poverty programs in the countrysides, but that task happens to be better performed by local government units.

Parlade virtually represents the mindset and boldness of the NTF-Elcac and if his only thoughts on the proliferation of laudable community initiatives is that of Satan’s apple, he is pretty much thinking like a serpent.