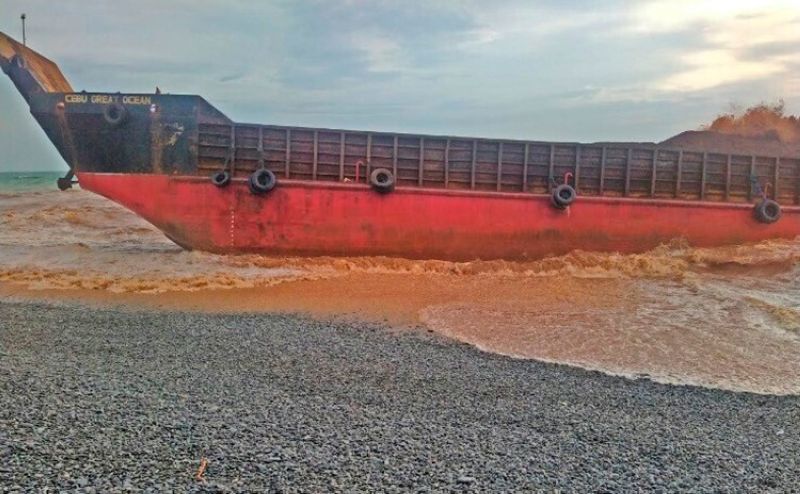 THE search and rescue operations for the missing nine crew members of the LCT Cebu Great Ocean have not yet ended.

There was still no confirmation on Thursday, April 22, 2021, if there were still Cebuanos among the missing, according to Commander Elaine Pangilinan, station commander of the Coast Guard Station Surigao del Norte.

She said the initial list of names of the crew aboard the vessel from the Agata Mining Ventures Inc. in Tubay, Agusan del Norte (a mining company where the vessel was operating) did not match the accounts of Roger Polo, the surviving chief mate.

Aside from deploying the Coast Guard’s sea vessels to help in the search and rescue operation, Pangilinan said they conducted foot patrols along the shorelines of Surigao del Norte and coordinated with the officials of the coastal barangays to help them monitor the shores.

Pangilinan said based on the initial investigation and on the accounts of Polo, the vessel requested to take shelter (anchorage) near Jabonga, Agusan del Norte because of the big waves brought about by Typhoon Bising.

While at anchor, the ship’s anchor chain broke. This resulted in a distressed ship, which led the crew members to abandon the ship.

The ship’s engine room was drowned after the ship capsized.

Pangilinan said the formal investigation will be handled by the PCG’s Marine Casualty Investigation Unit.

She said there were no crew found inside the vessel, though some of its cargoes, like the nickel ore, were still there. She could not confirm if the vessel was still loaded with the 2,000 liters of diesel fuel.

Pangilinan said the vessel is still in Malimono, Surigao del Norte. The towing process has not yet started as they are prioritizing the search and rescue operations.

She also cannot confirm who owns the nickel ore, but the vessel is reportedly owned by Harold Tan of Inter East Shipping and Lighterage Corp.

Jojie Villanueva, one of the 20 sailors of the ill-fated LCT Cebu Great Ocean, was able to survive his ordeal by clinging to his life vest for at least two days before he was rescued.

This was according to Lisa Villanueva, Jojie’s mother, who spoke to reporters about her son’s ordeal on Thursday, April 22.

Lisa told reporters that a day before the incident, she had been able to speak to her son on the phone as the ship was traveling towards Mindanao.

Jojie and his family are residents of Barangay Linao in Talisay City.

Lisa recalled that while she and her son were talking on the phone, she heard the sound of strong waves in the background.

When she asked her son about it, Jojie told her that they were traveling on choppy waters caused by Typhoon Bising.

But Jojie assured her that he and the rest of the boat’s crew were safe since they were currently anchored in a safe area.

“I asked my son to be vigilant and even asked him to keep praying his rosary while they were traveling,” Lisa said.

The day after they spoke, Lisa said she no longer received messages from Jojie.

She became anxious when one of her daughters told her that she received a message from Jojie, asking her to pray for him.

Concerned for her son’s safety, Lisa texted her son to continue praying his rosary.

But Jojie never replied to her text messages for the entire day, she added.

It was only on Wednesday, April 21, that she heard reports of what happened to the ship.

Lisa said she immediately contacted the shipping company where Jojie works to get updates on her son’s condition.

She was reportedly told by the shipping firm that Jojie and 18 of the vessel’s crew members initially reported to them that they were safe after they were able to escape the boat through life rafts.

But she was told by the firm that they needed to be rescued immediately as their life rafts were reportedly collapsing due to the strong waves.

Aside from that, there were no more updates from the crew concerning their status, Lisa said.

It was only through relatives living in Mindanao that Lisa learned of her son’s fate.

Her son reportedly got separated from his fellow crew members after their life raft collapsed due to the strong waves.

For two days, Jojie depended only on his life jacket for survival as he floated aimlessly in the ocean.

According to persons who rescued him, Jojie reportedly swam upon seeing the shore of a nearby island. (WBS, JKV)