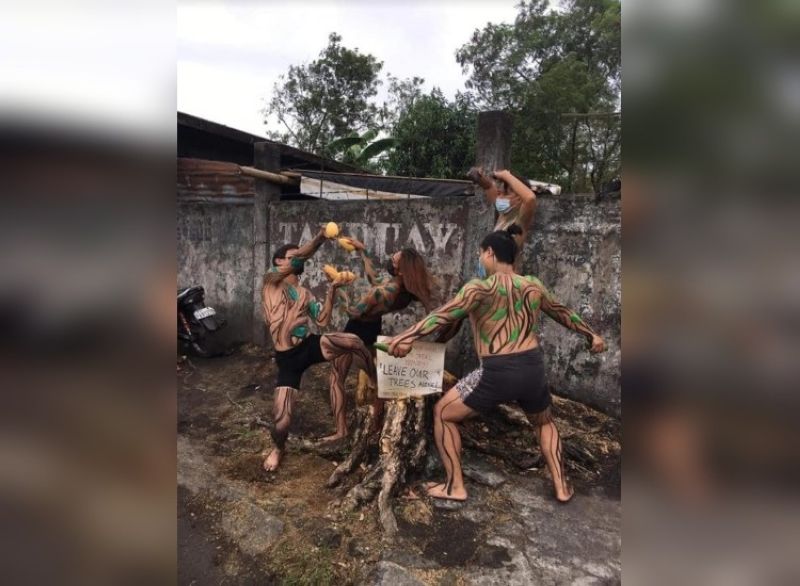 NEGROS. Members of the Negros Artist Collective headed by Rudy Reveche perform at the site where the 26 trees were recently cut, specifically outside the old airport along Araneta Streer in Bacolod City, Thursday morning. (Olive Seruelo photo)

This was stressed by the Group of Environmental Socialists (Goes) as it marked the 51st Earth Day celebration themed “Restore our Earth” Thursday, April 22, 2021.

The environment group, in a manifesto, said after over five decades of celebrating Earth Day, “we are still facing the same dilemma which is to call the attention of politicians, concerned government agencies, individuals, corporations to restore our earth.”

The Goes said if the charcoal maker was caught cutting trees to feed their hungry family, they are immediately thrown into captivity.

If the rich and powerful individuals, politicians, businessmen land grab a certain portion inside the protected area like the Northern Negros Natural Park (NNNP) and established resorts, vacation houses, restaurants and coffee shops, the Department of Environment and Natural Resources Office (DENR) as an enforcement agency becomes partial and slanted, the group said.

“Selective justice is no justice at all. The DENR cancels the rights of tenured migrants under the program of Integrated Social Forestry (ISF), while rich and powerful individuals, politicians, businessmen are allowed to own property inside the protected area through Special Use Agreement in Protected Areas (Sapa),” it added.

The manifesto added, “we need concrete actions and a holistic approach and it needs to be done now.”

The Goes stressed that it is a constant reminder to the government that there is a need to address the root cause of the problem in society.

“We cannot restore our earth if the government will continue to be selective on giving justice on these issues,” it said, adding that “enough of monopoly of power, greed, politics and money.”

“The time to act is now. Tomorrow will be too late to do what we should have done a long time ago,” it also said.

Meanwhile, as part of the Earth Day 2021 celebration in the province, members of the Negros Artist Collective performed at the site where the 26 trees were cut, specifically outside the old airport along Araneta Street in Bacolod City, Thursday morning.

Dubbed "Death and Resurrection," the performers depicted the death of the trees that were cut and the hope for the remaining stumps to recover and grow again.

The Provincial Environment Management Office along with the Diocese of Bacolod and other groups held an Earth Day Mass at the San Sebastian Cathedral and mass ride from Capitol Lagoon to the cathedral, among other activities.