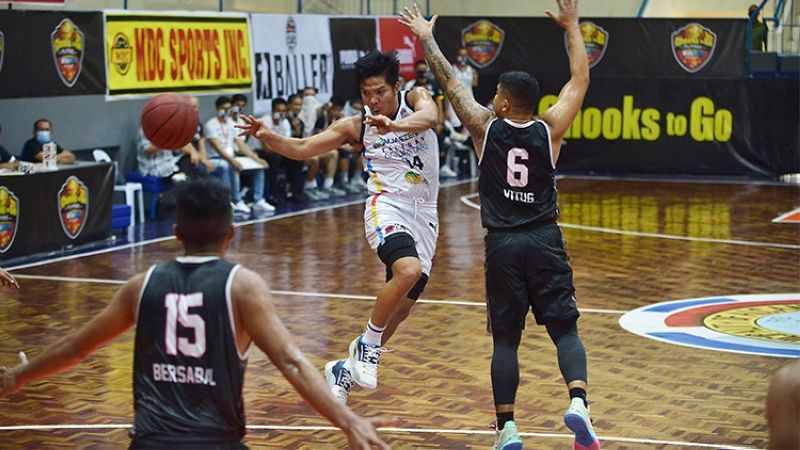 CEBU. Talisay's Darrell Shane Menina passes the ball off during their game versus Tabogon on Friday, April 23, 2021. (Chooks-to-Go)

ALCANTARA -- The MJAS Zenith-Talisay City Aquastars are cruising right now as they snatched their seventh straight win with a 104-75 rout of the Tabogon Voyagers in the Chooks-to-Go Pilipinas VisMin Super Cup on Friday afternoon, April 23, at the Alcantara Civic Center in Alcantara, Cebu.

Unlike their previous two matches wherein they had to make adjustments in the second half to take control of the game, the Aquastars did not wait long this time as they asserted themselves in the second canto and outscored the Voyagers, 27-12, to build a 19-point lead at halftime, 47-28.

Lord Casajeros and homegrown talent Joshua dela Cerna were particularly lethal during that stretch as they combined to score the team’s last nine points before the halftime buzzer. From there, it was all Talisay City as their reserves took full advantage of the extra playing time and wreaked havoc upon the Voyagers’ defense.

Talisay City remains perfect in this tournament at 7-0 (win-loss) while Tabogon’s rollercoaster campaign continued as they fell to 3-4. The Voyagers were coming off a morale-boosting 76-73 win over the heavily-favored ARQ Builders Lapu-Lapu Heroes on Thursday night but failed to bring the energy against Talisay City, which led to the 29-point defeat.

With none of the Aquastars’ starters playing more than 14 minutes, five reserves scored in double-figures led by dela Cerna and Gimpayan who scored 14 points each. Dela Cerna, a former standout of the Cebu Institute of Technology-University in the Cesafi, added four boards, four assists and a steal in 20 minutes of action.

In all, Talisay City’s reserves combined to score a whopping 84 points while their counterparts managed just 32.

Arvie Bringas and Joemari Lacastesantos led Tabogon with 14 points each while Christian Diaz had a double-double performance of 13 points and 11 rebounds.