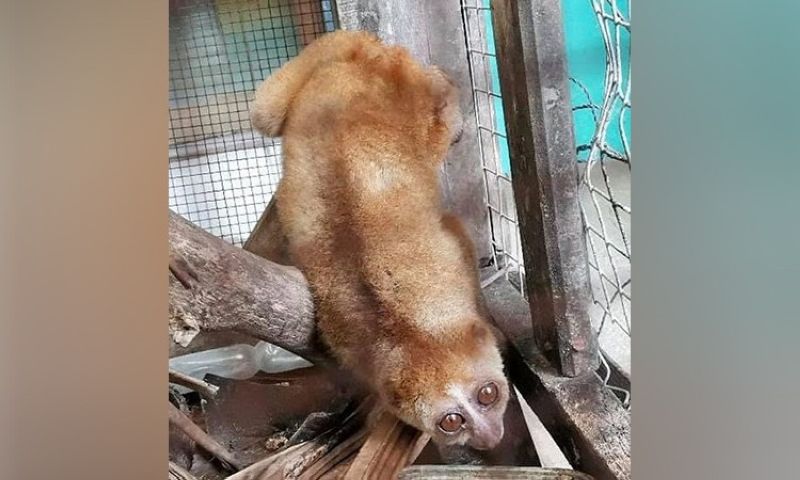 ZAMBOANGA. Personnel of the Ministry of Environment, Natural Resources, and Energy (Menre) in the Bangsamoro Autonomous Region in Muslim Mindanao rescue last week a Philippine slow loris locally known as "kokam" in the province of Tawi-Tawi. A photo handout shows the animal is now under the care of Menre and soon will be released back to its natural habitat. (SunStar Zamboanga)

THE Ministry of Environment, Natural Resources, and Energy (Menre) in the Bangsamoro Autonomous Region in Muslim Mindanao (Barmm), together with the police, rescued a Philippine slow loris, locally known as "kokam," in the province of Tawi-Tawi.

Espiliro said the slow loris was held captive for a few months by a resident of Mandulan village before it was rescued.

"The slow loris is now being monitored to determine if it has any diseases or if it is already capable of acclimatizing to its natural diet and habitat," Espiliro said.

He said the rescue also served as an opportunity for Menre personnel to conduct community awareness campaign about the ecological importance of native and endemic wildlife species in Tawi-Tawi, as well as the dangers of mishandling venomous species such as the Philippine slow loris.

A native to the country's Sulu Archipelago, slow loris is classified as vulnerable by the International Union for Conservation of Nature (IUCN) in 2015 due to their decreasing population.

Their continuing decline is mainly due to human encroachment into their natural habitat, harvesting them for pet trade.

Espirilo said they are eyeing Bud Kabugan as a release site to ensure the animal's safety after its full recovery. (SunStar Zamboanga)